Items related to The Code of Love: The True Story of Two Lovers Torn...

Linklater, Andro The Code of Love: The True Story of Two Lovers Torn Apart by the War That Brought Them Together

The Code of Love: The True Story of Two Lovers Torn Apart by the War That Brought Them Together 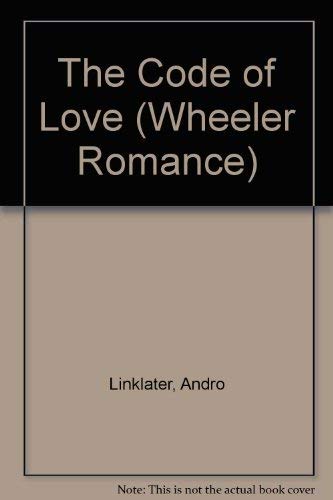 An astonishing true tale of secrets, love, and war.

Pamela Kirrage, beautiful and impulsive, met and fell in love with the dashing RAF pilot Donald Hill just months before Hill was shipped off to the Far East to protect the British colonies against Japanese aggression. They exchanged rings the day before he left, a promise to marry as soon as he returned. Little did they know that five years would pass before they saw each other again.

The Code of Love tells the stirring tale of Donald's experiences in the front lines of the Pacific Theater and Pamela's war efforts back in England in a dramatic, deeply moving portrayal of the World War II era and its aftermath. On the day the Japanese attacked Pearl Harbor, they also moved into Hong Kong, where Donald had the misfortune to be part of a small group of officers in charge of a meager five planes. He spent the rest of the war in a POW camp, keeping a journal of the indignities he faced in complex, nearly unbreakable code. Meanwhile, Pamela was swept into the frantic swirl of a wartime society eager to live to the fullest. She cooked meals for secret agents and danced the nights away with handsome soldiers. But her love for Donald never altered, and the two married within weeks of Donald's release at the end of the war. The scars Hill bore from his years of emotional encoding would eventually wear away at their relationship, though never their love.

Andro Linklater skillfully weaves the many fascinating parts of this tale together into an unforgettable narrative. From the mesmerizing siege of Hong Kong, to the romantic roller coaster of a truly great love, to the unbelievable efforts of the mathematician who finally cracked the encoded diary, The Code of Love is storytelling at its very finest.

This affecting story of an English couple's struggle to keep their love alive despite the damage inflicted by the husband's years as a POW reminds us that real-life traumas are more terrible and less easily resolved than those in war movies. Beautiful, vivacious Pamela Kirrage and quiet, intense RAF pilot Donald Hill fell in love in March 1939, less than four months before Donald was shipped out to Singapore. Captured during the fall of Hong Kong, he spent three and a half years in a Japanese camp, where he subsisted on miniscule rations and saw his companions tortured and killed for their part in an underground operation he had also joined. He recorded his experiences in an encoded diary that came to symbolize for Pamela, who married him in 1946, the crippling sorrows he was unable to share with her. The psychological legacy of Donald's imprisonment, particularly his fits of anger and emotional distance, prompted the Hills to quarrel and Pamela to drink. Unable to live together, miserable apart, they divorced in 1978, but remarried a year before Donald's death in 1985. Only when a British mathematician finally cracked the secret code of Donald's diary (keyed to the letters in his and Pamela's names) in 1996 could she wholly understand his private hell. Veteran nonfiction author Andro Linklater ably interweaves three distinct stories: Pamela and Donald's star-crossed romance, the tragic drama of his wartime suffering and endurance, and the gripping, step-by-step adventure of cracking the diary's code. His sad, moving book acknowledges the agony of a generation haunted by wartime horrors it could never discuss, while honoring the power of love to assuage, if not eliminate, emotional pain. --Wendy Smith

For fifty years, Pamela Kirrage longed to unlock the secrets of her husband's encrypted war diary. She was on the verge of giving up when she at last found a mathematician who became as obsessed with learning the secrets of the diary as she was. After months of painstaking investigation, he was finally able to crack the code, and in the process uncover the ending to an extraordinary World War II romance.
Pamela fell in love with RAF pilot Donald Hill in the summer of 1939, just a few months before he was sent to fight in Pacific. Although they planned to marry soon, Donald was captured after siege of Hong Kong and spent the next four years in a Japanese POW camp. Donald ultimately returned to Pamela, but he was never able to tell her about those lost years-and Pamela became convinced that the key to their happiness lay within the mysterious diary he brought back from the war. In The Code of Love Andro Linklater uses the decoded diary as well as extensive research and interviews to paint a vivid portrait of the World War II era, turning this dramatic love story into an inspiring, unconventional epic.

1. The Code of Love: The True Story of Two Lovers Torn Apart by the War That Brought Them Together

3. The Code of Love: The True Story of Two Lovers Torn Apart by the War That Brought Them Together