Items related to The Red Badge of Courage and Maggie

Stephen Crane The Red Badge of Courage and Maggie

The Red Badge of Courage and Maggie 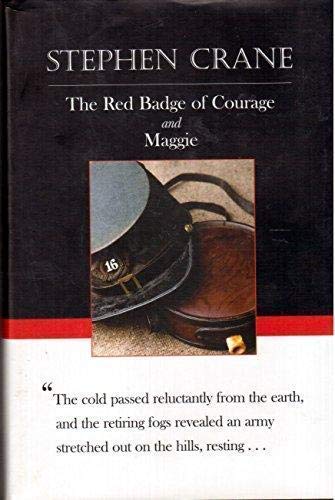 First published in 1895, this small masterpiece set the pattern for the treatment of war in modern fiction. The novel is told through the eyes of Henry Fleming, a young soldier caught up in an unnamed Civil War battle who is motivated not by the unselfish heroism of conventional war stories, but by fear, cowardice, and finally, egotism. However, in his struggle to find reality amid the nightmarish chaos of war, the young soldier also discovers courage, humility, and perhaps, wisdom. Although Crane had never been in battle before writing The Red Badge of Courage, the book was widely praised by experienced soldiers for its uncanny re-creation of the sights, sounds, and sense of actual combat. Its publication brought Crane immediate international fame and established him as a major American writer. Today, nearly a century later, the book ranks as an enduring landmark of American fiction. Written before but published after The Red Badge of Courage, Stephen Crane's Maggie: A Girl of the Streets offers a stark image of the underbelly of urban American life at the end of the nineteenth century. Maggie Johnson, a lovely innocent too slight to carry the weight of poverty, dreams of escaping New York's Bowery and the casual cruelty of her alcoholic family. After her younger brother dies, she runs off with Pete, a bartender with pretensions to wealth and culture. But Pete himself is easily seduced by the seemingly sophisticated Nellie, and Maggie finds herself abandoned in the unforgiving metropolis.

1. The Red Badge of Courage and Maggie [Hardcover] Crane, Stephen