Items related to Erin Brockovich and the Beverly Hills: Greenscam 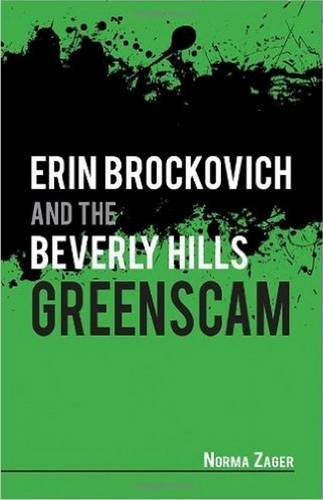 This timely exposï¿½ reveals Erin Brockovich's role in inciting public fear regarding the oil well at Beverly Hills High School. The author describes how Brockovich's methods to link the oil well with cancer occurrences in former students were suspect and questions the veracity of Brockovich's claims, using interviews with subject experts and studies done by the Air Quality Management District and others to disprove them. Focusing upon the Beverly Hills case, the author positions Brockovich as the poster child for what she terms "green porn," sexy Madison Avenue slant thats misleads citizens, distorts scientific information, and neither informs nor educates the public.

Not far from the glamour of Rodeo Drive, and the playing field of Beverly Hills High, rests the oil well that started a storm of controversy when legal assistant and environmental crusader Erin Brockovich incited public fear by claiming it was the source of cancer-causing chemicals. Beverly Hills Courier journalist Norma Zager investigated the subsequent allegations launched against several oil companies, the city of Beverly Hills, and its school district. Recalling her experience, Zager reveals how Brockovich misdirected worried families and the media with her unfounded allegations then presents the facts of the saga with accuracy, objectivity, and honesty.

Zager's exposï¿½ is a candid account of the case that created a media frenzy and played on the fear of anxious residents and students. Courtroom testimonies, excerpts from media personalities, and statements from the "greenscam" queen herself, Erin Brockovich, provide a thorough and engaging account of the lawsuit.

In addition to detailing the legal and personal saga, the book offers guidelines for communities to follow to ensure environmental and public safety and teaches residents how to discern the truth from hype-despite scare tactics.

"An engaging, wonderful story about how the powerful, rich, and famous can be brought down by an honest journalist determined to report the truth."
-Hon. Mark Egerman, former mayor, Beverly Hills

"Zager may have been the most important element in the entire investigation . . . and that was establishing the confidence from the community that she would find the truth and report it."
-Hon. Barry Brucker, former school board president and mayor, Beverly Hills