Items related to The Man with Two Arms: A Novel

Lombardo, Billy The Man with Two Arms: A Novel

The Man with Two Arms: A Novel 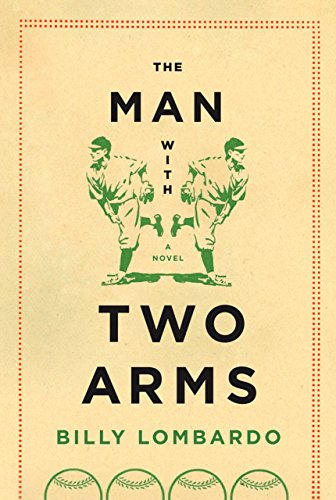 He even turns the basement into an indoor stadium. Enthralled by possibility, Henry begins guiding every instance of Denny's behavior, ensuring that every action performed on one side is matched by an equal action on the other-whether it's throwing a ball, swinging a bat, brushing his teeth, coloring, and even wiping his ass. Denny quickly distinguishes himself from his peers, most conspicuously by his ability to throw perfectly with either arm, a feat virtually unheard of in baseball. But he also possesses a visionary gift that not even he understands. Denny becomes a superior athlete, skyrocketing through the minor leagues and into the majors where he experiences immediate success, breaking records held for decades. When a journalist, a former student of Henry's hungry for a national breakout story, exaggerates the teacher's obsession and exposes him to the world as a monster, all hell breaks loose and the pressures of media and celebrity threaten to disrupt the world that Henry and Denny have created. A baseball novel-and much more--The Man with Two Arms is a story of the ways in which we protect, betray, forgive, love, and shape each other as we attempt to find our way through life.

Billy Lombardo is the author of four books of fiction: The Logic of a Rose: Chicago Stories, How to Hold a Woman, The Man With Two Arms, and The Day of the Palindrome. He is also the author of Meanwhile, Roxy Mourns, a book of poetry/prose. Billy is the co-founder and managing editor of Polyphony H.S., an international student-run literary magazine for high school writers and editors. He was the 2011 Artist-in-Residence at Illinois Benedictine University, and currently teaches English Literature and Creative Writing at The Latin School of Chicago. He is the 2011 recipient of the Nelson Algren Award.

"A switch pitcher? A guy as good as Seaver righty and Koufax lefty? The thought intrigues as does Billy Lombardo's touching and original debut novel."-Bob Costas

"Undoubtedly modern America¦s finest literary tribute to the baseball since Bernard Malamud¦s novel The Naturalè. Lombardo¦s one of a kind novel about a one of a kind ball player becomes as engrossing as a perfect game going into the late innings. If you¦re in the stands, you don¦t want to look away from the field, let alone leave the stadium early. Those who love to read about this great pastime will have the same feeling when reading about Denny Grenville, on and off the field. " Alan Cheuse, The Chicago Tribune

"Lombardo writes with a naturalness that makes his street-smart surface wholly convincing, but the seeming effortlessness of his storytelling depends on a sophisticated sense of craft and a deep sense of empathy."-Stuart Dybek

"Baseball stories are so often about fathers and sons too often, it seems, too predictably and too sappily, but Billy Lombardo has given us an intriguing and layered look at the hoary old love triangle Dad, Son and the National Pastime. The Man With Two Arms is a beguiling tale, with pleasant surpises and just the right mix of affection and cynicism. It understands the game but just as much, it understands what the game can do to those whom it ensnares."-Frank Deford

"Lombardo is as deft at handling the comic and tragic aspects of his story as his creation, Billy, is at whizzing them in from both sides of the plate. Let¦s subtitle The Man with Two Arms ¦The Unnatural¦ and call it the best baseball-themed fiction so far this decade.¦ Dallas Morning News

"The Man With Two Arms ranks with The Natural as one of the finest baseball novels I've ever read. And like The Natural, it's about much more than a game. It's about fathers and sons, dreams and regrets, love and betrayal. Lombardo has written a breathtaking wonder of a book."-Jonathan Eig, New York Times bestselling author of Luckiest Man: The Life and Death of Lou Gehrig and Opening Day: The Story of Jackie Robinson's First Season

"Billy Lombardo writes in his new book, 'Baseball was about grace and beauty and character, it was about strength and achievement.' From a story-telling sense, the same can be said of The Man with Two Arms."-Ira Berkow, winner of the Pulitzer Prize, author of The Corporal Was a Pitcher and Full Swing: Hits, Runs and Errors in a Writer's Life

"Billy Lombardo's wildly original novel should rate right up there with The Natural and The Celebrant. Danny Granville, the teen-age switch-pitching marvel, might become a serendipitous hero to many who spend their hours thinking, reading and dreaming about the wonders of the Summer Game." -Ray Robinson, author of Iron Horse: Lou Gehrig and His Time

"Engaging from the first sentence and intriguing to the last, this improbable- yet-awesomely-realistic story made me think differently about baseball, life and love." -Zack Hample, author of Watching Baseball Smarter

¦The Man With Two Arms isn¦t simply a baseball book; it¦s about family, about the unique, incomparable relationship between a father and son, about survival and competition itself.¦ New City Lit

¦This book hooked me deeper from the start, especially with its tender portrayal of a man as a husband and father¦ -- Catholic Sensibility Blog

9. The Man with Two Arms: A Novel Lombardo, Billy