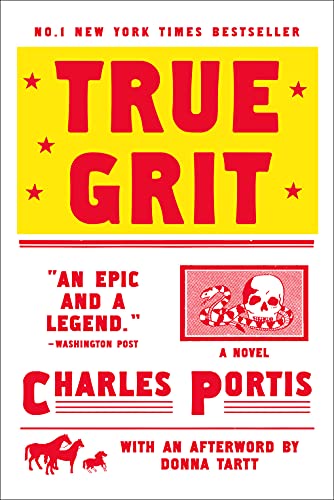 True Grit is his most famous novel--first published in 1968, and the basis for the movie of the same name starring John Wayne. It tells the story of Mattie Ross, who is just fourteen years of age when a coward going by the name of Tom Chaney shoots her father down in Fort Smith, Arkansas, and robs him of his life, his horse, and $150 in cash money. Mattie leaves home to avenge her father's blood. With the one-eyed Rooster Cogburn, the meanest available U.S. Marshal, by her side, Mattie pursues the homicide into Indian Territory. True Grit is eccentric, cool, straight, and unflinching, like Mattie herself. From a writer of true cult status, this is an American classic through and through. This new edition, with a smart new package and an afterword by acclaimed author Donna Tartt, will bring this masterpiece to an even broader audience.

Charles Portis lives in Arkansas, where he was born and educated. He served in the Marine Corps during the Korean War, was the London bureau chief of the New York Herald-Tribune, and was a writer for The New Yorker.

"Tom Wolfe, who worked with Portis as a reporter at the "New York Herald-Tribune" in the early 1960s called him the original laconic cutup. A generation of novelists since then have simply regarded him as a writers] writer and have made his name a sort of secret password. Soon, they'll no longer have him to themselves." --"Rolling Stone"

"An instant classic. Read it and have the most fun you've had reading a novel in years, maybe decades." --"Newsday"

"Charles Portis details the savagery of the 1870s frontier through an astonishing narrative voice: that of the 14-year-old Mattie Ross, a flinty, skeptical, Bible-thumping scourge." --"Wall Street Journal"

"I loved that book. Charles Portis got a real Mark Twain feeling, the cynicism and the humor. I tried to buy the book myself." --John Wayne