Items related to What Makes You Not a Buddhist, 1st Edition

Khyentse, Dzongsar Jamyang What Makes You Not a Buddhist, 1st Edition

What Makes You Not a Buddhist, 1st Edition 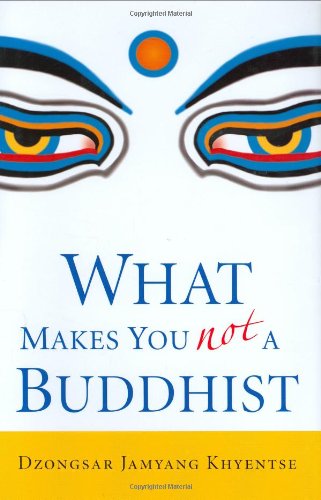 Dzongsar Khyentse is one of the most creative and innovative young Tibetan Buddhist lamas teaching today. The director of two feature films with Buddhist themes (the international sensation The Cup and Travelers and Magicians), this provocative teacher, artist, and poet is widely known and admired by Western Buddhists.

Moving away from conventional presentations of Buddhist teachings, Khyentse challenges readers to make sure they know what they’re talking about before they claim to be Buddhist. With wit and irony, Khyentse urges readers to move beyond the superficial trappings of Buddhism—beyond a romance with beads, incense, and exotic people in robes—straight to the heart of what the Buddha taught.

In essence, this book explains what a Buddhist really is, namely, someone who deeply understands the truth of impermanence and how our emotions can trap us in cycles of suffering. Khyentse presents the fundamental tenets of Buddhism in simple language, using examples we can all relate to.

Dzongsar Jamyang Khyentse (Khyentse Norbu) is a Tibetan Buddhist lama who travels and teaches internationally and is also an award-winning filmmaker. He is the abbot of several monasteries in Asia and the spiritual director of meditation centers in Vancouver, San Francisco, Sydney, Hong Kong, and Taipei. He is also head of a Buddhist organization called Siddhartha’s Intent.

Here at last is a crisp new voice in Tibetan Buddhism. Khyentse, a lama from an influential family and Buddhist lineage in Bhutan, is also a filmmaker, responsible for the sleeper hit The Cup, about a group of Tibetan monks obsessed with soccer. The monk brings the same multicultural fluency to his first book. He can make references to Viagra and Camilla Parker-Bowles as easily as he can tell stories of the Buddha's life. With confidence tempered by wit, he cuts to the core of Buddhism: four "seals"—truths—that make up a Buddhist "right view" of the world and existence. This book is not, repeat not, about meditation. Instead, it looks at everyday life through a Buddhist lens, understanding happiness and suffering from that perspective. Enlightenment ends suffering but also trumps happiness. Khyentse writes persuasively about the importance of understanding emptiness: disappointment lessens, expectations soften, and change is not a shock. There is much food for thought in this short book for Buddhist students and for anyone interested in the ongoing adaptation of traditional Eastern wisdom into postmodern Western settings. "You can change the cup," Khyentse writes, "but the tea remains pure." (Jan. 9)
Copyright © Reed Business Information, a division of Reed Elsevier Inc. All rights reserved.

1. What Makes You Not a Buddhist 1st Edition Khyentse Dzongsar Jamyang

2. What Makes You Not a Buddhist, 1st Edition

3. What Makes You Not a Buddhist

4. What Makes You Not a Buddhist, 1st Edition

5. What Makes You Not a Buddhist Khyentse, Dzongsar Jamyang