Items related to Radical Vegetarianism: A Dialectic of Diet and Ethic...

Radical Vegetarianism: A Dialectic of Diet and Ethic (Flashpoint) 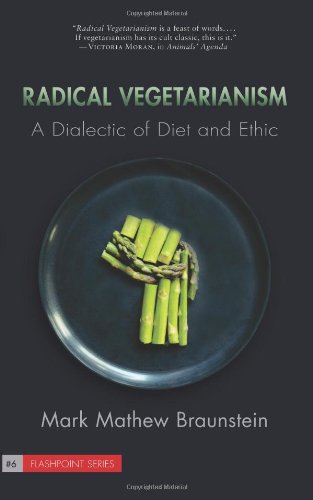 “This is the vegetarian dialectic of diet and ethic: not coincidentally, but absolutely essentially, those foods that deprive the fewest lives of others contribute to the longest lives for ourselves.” (from the preface)

About the title RADICAL VEGETARIANISM:
For advocating veganism, the book was branded radical when first published in 1981. All of 36 years later and now looking back, some contemporary readers describe the book as pioneering and prophetic, praise which I can accept with alacrity. As a vegan since 1970, I can attest that two human generations ago few vegetarians and fewer carnivores knew the words VEGAN or VEGANISM, neither their definitions nor their tenets. Hence my not titling the 1981 book Radical Veganism.

For the 2010 Revised Edition, for which one-third of the book was updated and rewritten, some readers have suggested changing the title to Radical Veganism. But I shun the conventional pronunciations of VEGAN and VEGANISM with sharp G's, as in GUN, and thus brandish the very concept we would wish to banish. So rather than be caught with a smoking V-Gun in my hand, I'll stick to my guns, and retain the title Radical Vegetarianism.

Mark Mathew Braunstein's articles about vegan vegetarianism have appeared in Vegetarian Times, Natural Health (East West), Vegetarian Voice, Animals' Agenda, Vegetarian Gourmet, Health Science, Backpacker, Healing Our World, Spirit of Change, and elsewhere. He is the author of the books Sprout Garden, Microgreen Garden, and two other books.  You can read many of his vegan articles at MarkBraunstein.Org

2. Radical Vegetarianism: A Dialectic of Diet and Ethic (Flashpoint)