Items related to Eagle in the Snow

Breem, Wallace Eagle in the Snow 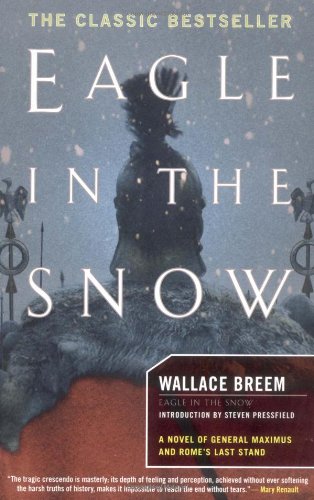 Banished to the Empire’s farthest outpost, veteran warrior Paulinus Maximus defends The Wall of Britannia from the constant onslaught of belligerent barbarian tribes. Bravery, loyalty, experience, and success lead to Maximus’ appointment as "General of the West" by the Roman emperor, the ambition of a lifetime. But with the title comes a caveat: Maximus needs to muster and command a single legion to defend the perilous Rhine frontier.

On the opposite side of the Rhine River, tribal nations are uniting; hundreds of thousands mass in preparation for the conquest of Gaul, and from there, a sweep down into Rome itself. Only a wide river and a wily general keep them in check.

With discipline, deception, persuasion, and surprise, Maximus holds the line against an increasingly desperate and innumerable foe. Friends, allies, and even enemies urge Maximus to proclaim himself emperor. He refuses, bound by an oath of duty, honor, and sacrifice to Rome, a city he has never seen. But then circumstance intervenes. Now, Maximus will accept the purple robe of emperor, if his scrappy legion can deliver this last crucial victory against insurmountable odds. The very fate of Rome hangs in the balance.

Combining the brilliantly realized battle action of Gates of Fire and the masterful characterization of Mary Renault’s The Last of the Wine, Eagle in the Snow is nothing less than the novel of the fall of the Roman empire.

From the Publisher:
In the tradition of Robert Graves (I, Claudius) and Mary Renault (The Last of the Wine), Eagle in the Snow is a quality re-publication of the lost classic with an introduction by international bestselling historical novelist Steven Pressfield.
About the Author:
Wallace Breem (1926-1990) entered the Indian Army Officers Training School in 1944 and later joined a crack regiment of the North West Frontier Force. After the war, he eventually joined the library staff of the Honorable Society of the Inner Temple. Breem’s first novel was Eagle in the Snow (1970, Gollancz). He went on to write The Legate’s Daughter (1974) and The Leopard and the Cliff (1978).