Items related to Red Star Over the Pacific

Red Star Over the Pacific 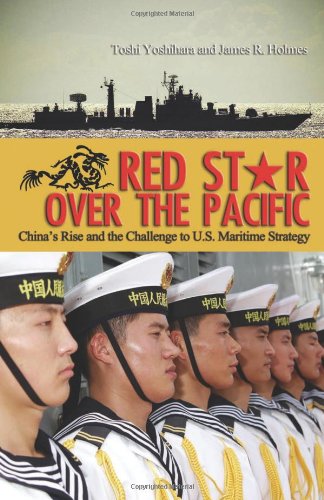 Combining a close knowledge of Asia and an ability to tap Chinese-language sources with naval combat experience and expertise in sea-power theory, the authors assess how the rise of Chinese sea power will affect U.S. maritime strategy in Asia. They argue that China is laying the groundwork for a sustained challenge to American primacy in maritime Asia, and to defend this hypothesis they look back to Alfred Thayer Mahan s sea-power theories, now popular with the Chinese. The book considers how strategic thought about the sea shapes Beijing s deliberations and compares China s geostrategic predicament to that of the Kaiser s Germany a century ago. It examines the Chinese navy s operational concepts, tactics, and capabilities and appraises China s ballistic-missile submarine fleet. The authors conclude that unless Washington adapts, China will present a challenge to America s strategic position.

Toshi Yoshihara and James R. Holmes are associate professors of strategy at the Naval War College in Newport, RI. Both authors hold PhDs from the Fletcher School of Law and Diplomacy, Tufts University.

Red Star Over the Pacific will be the go-to book on the rise of Chinese sea power. It is spare, yet exhaustive. It is balanced, yet pulls no punches. The clear writing is imbued with the love of subject. Rather than a sterile treatment of naval issues, the book is filled with historical and geographical awareness. Selected by The Atlantic as one of the best books of the year on Foreign Affairs. --Robert D. Kaplan, senior fellow at The Center for a New American Security,
The steady and systematic rise of Chinese sea power will soon present a fundamental challenge to the mastery which the U.S. Navy has maintained in the western Pacific for almost seven decades. In this outstanding book, Yoshihara and Holmes provide us with the definitive analysis of an impending revolution in naval affairs, as China extends its capability to control access over all of its littoral seas and Taiwan, and indeed within the entire Pacific first island chain. ... Every American maritime strategist and naval commander will want to read this vitally important book. --James Kurth, Claude C. Smith Professor of Political Science, Emeritus, Swarthmore College

The shifting strategic balance between the United States and China as Beijing develops the country s seapower will be one of the major issues of the 21st century. While the authors of this thoughtful and expert study show that the motives behind Chinese expansion may not necessarily imply malign intent, and certainly should not automatically be treated that way by Washington, they do show that the United States is bound to be increasingly preoccupied by the consequences of this major challenge. --Geoffrey Till Professor of Maritime Studies, King's College London

1. Red Star Over the Pacific

2. Red Star Over the Pacific

3. Red Star over the Pacific: China's Rise and the Challenge to U.S. Maritime Strategy

4. Red Star Over the Pacific

5. Red Star Over the Pacific

6. Red Star Over the Pacific

7. Red Star Over the Pacific

8. Red Star over the Pacific: China's Rise and the Challenge to U.s. Maritime Strategy

Shipping: US$ 13.71
From United Kingdom to U.S.A.
Destination, rates & speeds