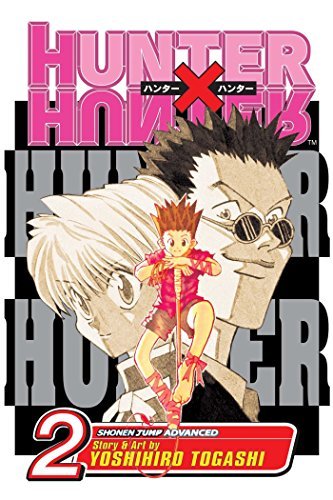 Gon and his friends Leorio and Kurapika have more to worry about than just the Hunter Exam--their fellow applicants are deadly serious. Hisoka, the mad magician, nearly kills them in a mock test and Killua reveals that appearances can be deceiving. Then there are the tests, which prove to be as varied as they are difficult. The picky proctors of the second exam demand the applicants perform culinary feats of wonder, and it takes the intervention of the President of the Hunter Association Review Board to convince them to let anyone pass at all!

Yoshihiro Togashi's manga career began in 1986 at the age of 20, when he won the coveted Osamu Tezuka Award for new manga artists. He debuted in the Japanese Weekly Shonen Jump magazine in 1989 with the romantic comedy Tende Shôwaru Cupid. From 1990 to 1994 he wrote and drew the hit manga YuYu Hakusho, which was followed by the dark comedy science-fiction series Level E and the adventure series Hunter x Hunter. In 1999 he married the manga artist Naoko Takeuchi."

Shipping: US$ 30.31
From United Kingdom to U.S.A.
Destination, rates & speeds