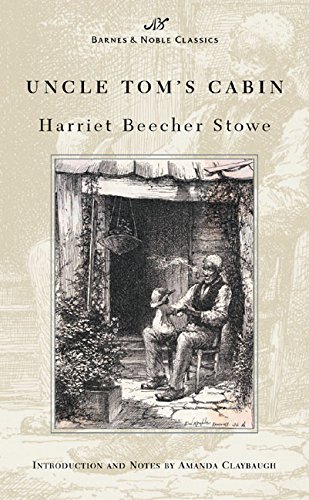 &&LDIV&&R&&LDIV&&R&&LI&&RUncle Tom's Cabin&&L/I&&R, by &&LB&&RHarriet Beecher Stowe&&L/B&&R, is part of the &&LI&&RBarnes & Noble Classics&&L/I&&R&&LI&&R &&L/I&&Rseries, which offers quality editions at affordable prices to the student and the general reader, including new scholarship, thoughtful design, and pages of carefully crafted extras. Here are some of the remarkable features of &&LI&&RBarnes & Noble Classics&&L/I&&R: &&LDIV&&R

All editions are beautifully designed and are printed to superior specifications; some include illustrations of historical interest. &&LI&&RBarnes & Noble Classics &&L/I&&Rpulls together a constellation of influences―biographical, historical, and literary―to enrich each reader's understanding of these enduring works.&&L/DIV&&R&&L/DIV&&R&&L/DIV&&R&&LDIV&&R &&L/DIV&&R&&LDIV&&RNearly every young author dreams of writing a book that will literally change the world. A few have succeeded, and &&LB&&RHarriet Beecher Stowe&&L/B&&R is such a marvel. Although the American anti-slavery movement had existed at least as long as the nation itself, Stowe’s &&LI&&RUncle Tom’s Cabin&&L/I&&R (1852) galvanized public opinion as nothing had before. The book sold 10,000 copies in its first week and 300,000 in its first year. Its vivid dramatization of slavery’s cruelties so aroused readers that it is said Abraham Lincoln told Stowe her work had been a catalyst for the Civil War. &&LP&&RToday the novel is often labeled condescending, but its characters―Tom, Topsy, Little Eva, Eliza, and the evil Simon Legree―still have the power to move our hearts. Though “Uncle Tom” has become a synonym for a fawning black yes-man, Stowe’s Tom is actually American literature’s first black hero, a man who suffers for refusing to obey his white oppressors. &&LI&&RUncle Tom’s Cabin&&L/I&&R is a living, relevant story, passionate in its vivid depiction of the cruelest forms of injustice and inhumanity―and the courage it takes to fight against them. &&L/P&&R&&LP&&R&&LB&&RAmanda Claybaugh&&L/B&&R is Assistant Professor of English and Comparative Literature at Columbia University.&&L/P&&R&&L/DIV&&R

Uncle Tom, Topsy, Sambo, Simon Legree, little Eva: their names are American bywords, and all of them are characters in Harriet Beecher Stowe's remarkable novel of the pre-Civil War South. Uncle Tom's Cabin was revolutionary in 1852 for its passionate indictment of slavery and for its presentation of Tom, "a man of humanity," as the first black hero in American fiction. Labeled racist and condescending by some contemporary critics, it remains a shocking, controversial, and powerful work -- exposing the attitudes of white nineteenth-century society toward "the peculiar institution" and documenting, in heartrending detail, the tragic breakup of black Kentucky families "sold down the river." An immediate international sensation, Uncle Tom's Cabin sold 300,000 copies in the first year, was translated into thirty-seven languages, and has never gone out of print: its political impact was immense, its emotional influence immeasurable.
From the Paperback edition.