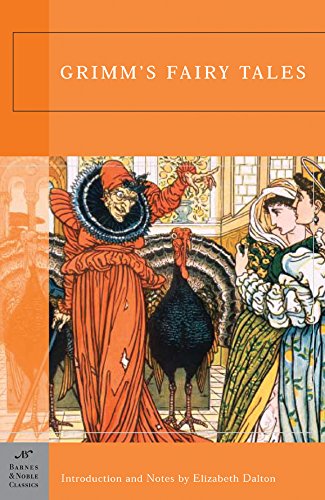 &&LDIV&&R&&LDIV&&R&&LDIV&&R&&LI&&RGrimm's Fairy Tales&&L/I&&R, by &&LSTRONG&&RWilhelm and Jacob Grimm&&L/B&&R&&L/B&&R, is part of the &&LI&&RBarnes & Noble Classics&&L/I&&R&&LI&&R &&L/I&&Rseries, which offers quality editions at affordable prices to the student and the general reader, including new scholarship, thoughtful design, and pages of carefully crafted extras. Here are some of the remarkable features of &&LI&&RBarnes & Noble Classics&&L/I&&R: &&LDIV&&R

Elizabeth Dalton is Professor of English and Comparative Literature at Barnard College. She has published fiction and criticism in The New Yorker, Partisan Review, Commentary, and The New York Times Book Review.

Originally intended for adults, the Kinder- und Hausmärchen (Children’s and Household Stories) of the Brothers Grimm has become not only the world’s most important collection of folk and fairy tales, but also the central work in the literary culture of childhood. Paradoxically, the tales have been criticized ever since they first appeared as inappropriate for children—too frank about sex, too violent, too dark. The Grimms themselves began censoring the sex as they brought out successive editions, and subsequent editors and translators have continued the process, modifying the violence as well. But the darkness remains.

These tales of enchantment and ordeal contain terrifying encounters with witches, giants, and devouring beasts. Even the more benign tales usually involve suffering or danger: persecution by a cruel stepmother or abusive father, a battle with a demon, at the very least marriage to a hedgehog or some other strange creature. There are confrontations with death itself, as in “The Three Snake-Leaves” and “The Godfather Death,” and with the enchanted sleep that resembles it, as in “The Glass Coffin” and “Briar Rose,” the Sleeping Beauty story. Yet in spite of these dark and deathly elements, or perhaps even because of them, the Grimms’ tales have a compelling vitality. They are cruder, wilder, more violent, and more fun than the elegant and poignantly beautiful tales of the Grimms’ Danish contemporary Hans Christian Andersen.

Unlike Andersen, the Grimms did not invent new tales but collected old ones, with the intention of preserving the oral tradition of the German peasantry. Whether in fact they fulfilled that intention has been questioned. Their tales do afford a glimpse of a world of castles and forests, nobles and peasants, superstitious beliefs and primitive practices that suggest origins at least as old as feudal Europe, and often much older. Some of the tales have been traced back through the centuries by way of earlier versions until they disappear into prehistoric times.

Residues of the social and material conditions of the societies from which they came can be found in the tales, but transformed, as in a dream, by wish, fear, and fantasy. Indeed, the tales often have the strange logic, the freedom from the constraints of time and space, and the abrupt and violent actions that characterize dreams and that Freud attributed to what he called “primary process,” the kind of thinking that prevails in the unconscious and in childhood. The boundary between reality and fantasy is porous and unstable; everything, including inanimate objects, is alive and responds magically to wishes and fears. There are mysteries and secrets everywhere, as in the lives of children, who are kept in the dark about fundamental realities—sex, death, money, and the whole complex mystery of their parents’ desires and disappointments.

The sense of mystery and the belief in the magical powers of thought never go away entirely, but live on in the adult unconscious, accounting for the inexhaustible appeal of fairy tales. They reappear continually in new forms, not only for children but as sophisticated works for adults, such as Jean Cocteau’s classic film La Belle et la Bête (1946), Donald Barthelme’s ironic postmodern novel Snow White (1967), the unconventional feminist fictions of Angela Carter, the Stephen Sondheim musical Into the Woods (1987), and so on. Most German writers who came after the Grimms tried sooner or later to write a fairy tale. Even the stories of Franz Kafka are like fairy tales gone wrong. The patterns of fantasy and the narrative structures of the tales apparently satisfy profound psychological and aesthetic needs, endlessly generating new versions.

Motifs from the Grimms’ tales also appear in older classic works of fiction and drama, including some that could not possibly have been influenced by them, such as Shakespeare’s plays. In The Merchant of Venice (c. 1595), the riddle of the three caskets posed to the candidates for Portia’s hand is like the “wooer-tests” in many tales. In King Lear (c. 1605), the old king demands from his daughter all her love, including that owed to a husband, like the incestuous king in the Grimms’ tale “Allerleirauh” (“Many Furs”). Lear’s good and loving daughter, Cordelia, is persecuted, like Cinderella, by two wicked elder sisters.

The Cinderella pattern is perhaps the most widespread of all: The transformation of a poor and insignificant girl into a belle is the theme of innumerable novels, plays, and films. In Jane Austen’s Persuasion (1818), for instance, Anne Elliot is treated like a servant by her hateful sisters, yet it is she who wins the love of the princely Captain Wentworth. Isabel Archer, in Henry James’s The Portrait of a Lady (1881), even has a fairy godmother—as Charles Perrault’s Cinderella does, although the Grimms’ does not—a male one who leaves her a fortune, enabling her, ironically, to choose the poorest but worst of her canonical three suitors. This figure of the mysterious benefactor, like the dwarf in “The Singing Bone,” recurs frequently in the tales, and also in novels, especially those of Dickens—Magwitch in Great Expectations (1860–1861), for instance. Novels and plays differ from tales in many respects, notably in giving their characters rich inner lives, while in tales psychological conflicts are worked out in action. Nonetheless, the parallels at the level of plot between tales and the larger and more fully developed forms are striking and could make a very long list. It seems that the Kinder- und Hausmärchen form a great repository of narrative motifs that have circulated throughout Europe in various forms for hundreds, perhaps thousands, of years. How they made their way into the tales is only one of the many unresolved questions associated with the Grimms and their work.

Book Description Barnes & Noble Inc, United States, 2003. Paperback. Condition: New. Ludwig Emil Grimm (illustrator). Language: English. Brand new Book. &&LDIV&&R&&LDIV&&R&&LDIV&&R&&LI&&RGrimm's Fairy Tales&&L/I&&R, by &&LSTRONG&&RWilhelm and Jacob Grimm&&L/B&&R&&L/B&&R, is part of the &&LI&&RBarnes & Noble Classics&&L/I&&R&&LI&&R &&L/I&&Rseries, which offers quality editions at affordable prices to the student and the general reader, including new scholarship, thoughtful design, and pages of carefully crafted extras. Here are some of the remarkable features of &&LI&&RBarnes & Noble Classics&&L/I&&R: &&LDIV&&RNew introductions commissioned from today's top writers and scholars Biographies of the authors Chronologies of contemporary historical, biographical, and cultural events Footnotes and endnotes Selective discussions of imitations, parodies, poems, books, plays, paintings, operas, statuary, and films inspired by the work Comments by other famous authors Study questions to challenge the reader's viewpoints and expectations Bibliographies for further reading Indices & Glossaries, when appropriateAll editions are beautifully designed and are printed to superior specifications; some include illustrations of historical interest. &&LI&&RBarnes & Noble Classics &&L/I&&Rpulls together a constellation of influences--biographical, historical, and literary--to enrich each reader's understanding of these enduring works.&&L/DIV&&R&&L/DIV&&R&&LP style="MARGIN: 0in 0in 0pt"&&R &&L/P&&R&&LP style="MARGIN: 0in 0in 0pt"&&RWith the words "Once upon a time," the Brothers Grimm transport readers to a timeless realm where witches, giants, princesses, kings, fairies, goblins, and wizards fall in love, try to get rich, quarrel with their neighbors, and have magical adventures of all kinds--and in the process reveal essential truths about human nature. &&L/P&&R&&LP style="MARGIN: 0in 0in 0pt"&&R &&L/P&&R&&LP style="MARGIN: 0in 0in 0pt"&&RWhen &&LB&&RJacob and Wilhelm Grimm&&L/B&&R set out to collect stories in the early 1800s, their goal was not to entertain children but to preserve Germanic folklore--and the hard life of European peasants was reflected in the tales they discovered. However, once the brothers saw how the stories entranced young readers, they began softening some of the harsher aspects to make them more suitable for children. &&L/P&&R&&LP style="MARGIN: 0in 0in 0pt"&&R &&L/P&&R&&LP style="MARGIN: 0in 0in 0pt"&&RA cornerstone of Western culture since the early 1800s, &&LI&&RGrimm's Fairy Tales&&L/I&&R is now beloved the world over. This collection of more than 120 of the Grimms' best tales includes such classics as "Cinderella," "Snow White," "Hansel and Grethel," "Rapunzel," "Rumpelstiltskin," "Little Red Riding Hood," and "The Frog Prince," as well as others that are no less delightful.&&L/P&&R&&LP style="MARGIN: 0in 0in 0pt"&&R &&L/P&&R&&LDIV&&R&&LB&&RElizabeth Dalton&&L/B&&R is Professor of English and Comparative Literature at Barnard College. She has published fiction and criticism in &&LI&&RThe New Yorker&&L/I&&R, &&LI&&RPartisan Review&&L/I&&R, &&LI&&RCommentary&&L/I&&R, and &&LI&&RThe New York Times Book Review&&L/I&&R.&&L/DIV&&R&&L/DIV&&R&&L/DIV&&R. Seller Inventory # AWC9781593080563