Items related to The Varieties of Religious Experience: A Study in Human...

William James The Varieties of Religious Experience: A Study in Human Nature

The Varieties of Religious Experience: A Study in Human Nature 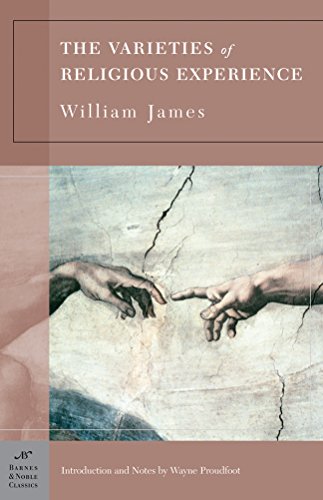 &&LDIV&&R&&LDIV&&R&&LI&&RThe Varieties of Religious Experience&&L/I&&R, by &&LB&&RWilliam James&&L/B&&R, is part of the &&LI&&R&&LI&&RBarnes & Noble Classics&&L/I&&R &&L/I&&Rseries, which offers quality editions at affordable prices to the student and the general reader, including new scholarship, thoughtful design, and pages of carefully crafted extras. Here are some of the remarkable features of &&LI&&RBarnes & Noble Classics&&L/I&&R: &&LDIV&&R

All editions are beautifully designed and are printed to superior specifications; some include illustrations of historical interest. &&LI&&RBarnes & Noble Classics &&L/I&&Rpulls together a constellation of influences―biographical, historical, and literary―to enrich each reader's understanding of these enduring works.&&L/DIV&&R&&L/DIV&&R&&LP style="MARGIN: 0in 0in 0pt"&&R &&L/P&&R&&LP style="MARGIN: 0in 0in 0pt"&&RAcclaimed as one of the greatest works of nonfiction published in the twentieth century, &&LB&&RWilliam James&&L/B&&R’s &&LI&&RThe Varieties of Religious Experience&&L/I&&R was revolutionary in its view of religious life as centered not within the Church but solely within “the feelings, acts, and experiences of individual men in their solitude.”&&LBR&&R&&LBR&&RUsing the language of psychology, James tries to explain religious phenomena―such as conversion, repentance, mysticism, and saintliness―as psychic energy that arises from the unconscious mind in times of trouble. To support his theories, James turns to the autobiographical writings of a wide variety of mystics and writers, including Walt Whitman, Martin Luther, Voltaire, Emerson, and Tolstoy. The result is a colorful and wide-ranging collection of recorded experiences that James compares, categorizes, and analyzes. Many of his categories―including the sick soul, the divided self, and healthy-mindedness―have become standard in the study of religions.&&LBR&&R&&LBR&&RExquisitely written, &&LI&&RThe Varieties of Religious Experience&&L/I&&R has had a profound influence on modern spiritual thought, including the psychology of religion and recovery programs such as Alcoholics Anonymous.&&LBR&&R&&L/P&&R&&LP style="MARGIN: 0in 0in 0pt"&&R&&LSTRONG&&RWayne Proudfoot&&L/B&&R &&L/B&&Ris Professor of Religion at Columbia University, specializing in the philosophy of religion. He has published &&LI&&RReligious Experience, &&L/I&&Ras well as articles on William James, Charles Sanders Peirce, and American Protestant thought. &&L/P&&R&&L/DIV&&R

"I am neither a theologian, nor a scholar learned in the history of religions, nor an anthropologist. Psychology is the only branch of learning in which I am particularly versed. To the psychologist the religious propensities of man must be at least as interesting as any other of the facts pertaining to his mental constitution. It would seem, therefore, as a psychologist, the natural thing for me would be to invite you to a descriptive survey of those religious propensities."

When William James went to the University of Edinburgh in 1901 to deliver a series of lectures on "natural religion," he defined religion as "the feelings, acts, and experiences of individual men in their solitude, so far as they apprehend themselves to stand in relation to whatever they may consider the divine." Considering religion, then, not as it is defined by--or takes place in--the churches, but as it is felt in everyday life, he undertook a project that, upon completion, stands not only as one of the most important texts on psychology ever written, not only as a vitally serious contemplation of spirituality, but for many critics one of the best works of nonfiction written in the 20th century. Reading The Varieties of Religious Experience, it is easy to see why. Applying his analytic clarity to religious accounts from a variety of sources, James elaborates a pluralistic framework in which "the divine can mean no single quality, it must mean a group of qualities, by being champions of which in alternation, different men may all find worthy missions." It's an intellectual call for serious religious tolerance--indeed, respect--the vitality of which has not diminished through the subsequent decades.

"The Varieties of Religious Experience is certainly the most notable of all books in the field of the psychology of religion and probably destined to be the most influential [one] written on religion in the twentieth century," said Walter Houston Clark in Psychology Today.  The book was an immediate bestseller upon its publication in June 1902.  Reflecting the pluralistic views of psychologist-turned-philosopher William James, it posits that individual religious experiences, rather than the tenets of organized religions, form the backbone of religious life.  James's discussion of conversion, repentance, mysticism, and hope of reward and fears of punishment in the hereafter--as well as his observations on the religious experiences of such diverse thinkers as Voltaire, Whitman, Emerson, Luther, Tolstoy, and others--all support his thesis.  "James's characteristic humor, his ability to put down the pretentious and to be unpretentious, and his willingness to take some risks in his choices of ancedotal data or provocative theories are all apparent in the book," noted Professor Martin E. Marty.  "A reader will come away with more reasons to raise new questions than to feel that old ones have been resolved."

1. The Varieties of Religious Experience: A Study in Human Nature

2. The Varieties of Religious Experience: A Study in Human Nature

3. The Varieties of Religious Experience: A Study in Human Nature