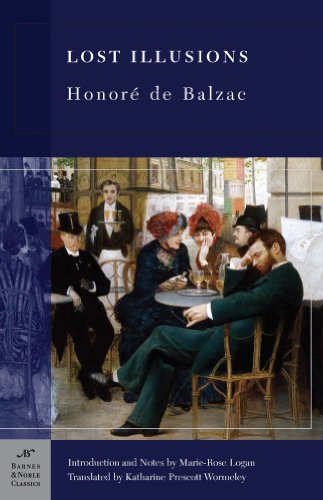 &&LDIV&&R&&LDIV&&R&&LDIV&&R&&LI&&RLost Illusions&&L/I&&R, by &&LB&&RHonore de Balzac&&L/B&&R, is part of the &&LI&&RBarnes & Noble Classics&&L/I&&R&&LI&&R &&L/I&&Rseries, which offers quality editions at affordable prices to the student and the general reader, including new scholarship, thoughtful design, and pages of carefully crafted extras. Here are some of the remarkable features of &&LI&&RBarnes & Noble Classics&&L/I&&R: &&LDIV&&R

All editions are beautifully designed and are printed to superior specifications; some include illustrations of historical interest. &&LI&&RBarnes & Noble Classics &&L/I&&Rpulls together a constellation of influences―biographical, historical, and literary―to enrich each reader's understanding of these enduring works.&&L/DIV&&R&&L/DIV&&R&&L/DIV&&R&&LDIV&&R &&L/DIV&&R&&LDIV&&RAmong the best known of &&LSTRONG&&RBalzac&&L/B&&R’s novels, &&LI&&RLost Illusions&&L/I&&R chronicles the rise and fall of Lucien Chardon, a vain but naive young poet who leaves his provincial home to seek success and fortune in Parisian society. Paralleling Lucien’s disastrously ambitious journey is the story of his friend and brother-in-law, hard-working inventor David Séchard, who is beset by unscrupulous competitors and cheated in his printing business by his own father.&&LBR&&R &&LBR&&RConsidered the founder of French realism, Balzac painted equally faithful pictures of the glittering but superficial world of society and the lonely struggle of impoverished men of genius. The city has a corrosive effect on Lucien’s artistic talent and moral strength, while David takes a brave stand against the constraints of provincial small-mindedness. Balzac plays out their contrasting but intertwined stories against the enduring themes of love, ambition, greed, loyalty, vanity, and betrayal. Will Lucien’s debts be the ruin of both?&&LBR&&R &&LBR&&RPublished between 1837 and 1843, &&LI&&RLost Illusions&&L/I&&R is part of &&LI&&RLa Comédie Humaine,&&L/I&&R into which Balzac grouped more than ninety interlocking novels. In &&LI&&RLost Illusions&&L/I&&R, scores of minor characters from these other works help bring early-nineteenth-century France to brilliant life.&&L/DIV&&R&&LDIV&&R &&L/DIV&&R&&LDIV&&R&&LDIV&&R&&LB&&RMarie-Rose Logan&&L/B&&R received her Ph.D. from Yale and has held teaching appointments at Yale, Rice, Temple, and Columbia. Professor Logan is a recipient of the French government’s Palmes Académiques and of awards from several foundations, including the National Endowment for the Humanities.&&L/DIV&&R&&L/DIV&&R&&L/DIV&&R

"Balzac [was] the master unequalled in the art of painting humanity as it exists in modern society," wrote George Sand. "He searched and dared everything."

Written between 1837 and 1843, Lost Illusions reveals, perhaps better than any other of Balzac's ninety-two novels, the nature and scope of his genius. The story of Lucien Chardon, a young poet from Angoulême who tries desperately to make a name for himself in Paris, is a brilliantly realistic and boldly satirical portrait of provincial manners and aristocratic life. Handsome and ambitious but naïve, Lucien is patronized by the beau monde as represented by Madame de Bargeton and her cousin, the formidable Marquise d'Espard, only to be duped by them. Denied the social rank he thought would be his, Lucien discards his poetic aspirations and turns to hack journalism; his descent into Parisian low life ultimately leads to his own death.

"Balzac was both a greedy child and an indefatigable observer of a greedy age, at once a fantastic and a genius, yet possessing a simple core of common sense," noted V. S. Pritchett, one of his several biographers. Another, André Maurois, concluded: "Balzac was by turns a saint, a criminal, an honest judge, a corrupt judge, a minister, a fob, a harlot, a duchess, and always a genius."

This Modern Library edition presents the translation by Kathleen Raine.

The Modern Library of the World's
Best Books

"All Balzac's characters are endowed with the zest for life with which he himself was animated. All his fabrications are
as intensely colored as dreams. From the highest ranks of the aristocracy to the lowest dregs of society, all the actors in his
Comedie are more eager for life, more energetic and cunning in their struggles, more patient in misfortune, more greedy in pleasure, more angelic in devotion than they are in the comedy of the real world. In a word, everyone in Balzac has genius....Every living soul is a weapon loaded to the very muzzle with will."