Items related to The Kat Trap: A Novel (Zane Presents) 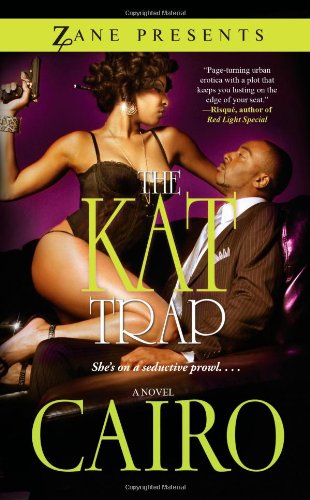 In this sexy, raw debut novel, a vivacious young murderess seduces her unsuspecting victims to their own deaths. . . .

Katrina is a self-proclaimed hood goddess. With her razor-sharp attitude, alluring charm, and exotic beauty, she is willing to do whatever it takes to climb—or kill—her way out of the hood. With two bodies already on her hands by the age of twenty, she gets the opportunity of a lifetime when a mysterious man invites her to be the first female killer on his multimillion-dollar team of professional assassins.

Kat tempts her victims with her irresistible charm, but she cannot resist the rush that satisfies her hungry libido with each murder and makes her crave more and more power. Disturbingly witty and devilishly enticing, The Kat Trap lures readers into a deliciously cutthroat criminal world of money, glamour, and ultimate self-destruction.


They say the closest ones to ya are the same ones who'll sneak up behind ya and stick the knife through ya. Sleepin' on me is your biggest mistake. Close ya eyes, and ya'll find ya'self in a river of blood. One for the money, one for the nut, one bullet to the skull...nigga, what?!


My name is Katrina, Kat for short. Voluptuous, vivacious, and vicious -- at five-feet-eight, a buck-twenty-five, I'm that bitch. Be clear. Fine, fly, and fabulous with a wicked brain game and a fat, wet, deep pussy so good it makes a nigga shake the minute I wrap my walls around his dick. I'm that chick with the small waist and the Hottentot Venus ass: big, round, and juicy. The kinda ass that makes a nigga's jaw drop and his neck snap every time I walk past. Niggas love it when I make my bootie bounce, shake, and clap for 'em. With my cinnamon skin, shoulder-length hair, thick lashes wrapped around chinky eyes, I am a hood goddess. I'm that chick the bitches bow down to, and niggas worship. I was born and bred in Brooklyn, a product of one of the most notorious housing projects known for drugs and murders. If you're an uninvited or unwanted guest, beware. You might get in, but you comin' out either slashed up, beat down, or bodied.

I'ma keep it real cute for ya. Ain't shit sweet 'bout life on the compound -- the hood, the concrete jungle. It's ruthless. Game recognizes game. And ya either learn to play hard or get played. Ya either eat or be eaten. It's that simple. Make no mistake: The hood don't give a fuck 'bout you or the next chick. And it definitely ain't beat for what the next nigga's into. You either handle ya business or get handled. Ain't no way 'round it. I ain't tryna make excuses. It is what it is. I learned how to handle mine without sellin' my ass, or suckin' a string of dicks in alleyways or up on somebody's rooftop. I studied the game, watched its playas, and mastered the rules without stuntin' on the next bitch, or hustlin' a nigga off his grip. I ain't have to claw or scheme my way up to nobody's top. I'm from Brooklyn, baby! I kicked open the muhfuckin' door of opportunity, smashed out its windows, and fuckin' snatched my spot 'cause I'm that bitch.

So, if ya lookin' to hear me spit some whack-ass story 'bout some fast-assed little ho from the hood stretched out on a pissy mattress in shit-stained panties, eating dry-ass cereal out of a dirty-assed plastic bowl watching cartoons on a busted-ass blackand- white TV while counting roaches, then you got the wrong one. If ya wanna hear 'bout a bitch goin' hungry 'cause her moms sold her food stamps to get high, nope...not gonna get it. If ya lookin' to hear 'bout some young chick who got her ass beat with extension cords, razor straps, and switches because she was too hot in the ass, then ya might as well step now, 'cause that ain't what I'm here to serve ya. Yeah, we had roaches, okay...who didn't? But I never got my ass beat, always had food to eat, and I ain't never laid around on no pissy-assed mattress.

Uh, yeah, a bitch was born poor. Yeah, my moms was clockin' welfare, and? Her ass still worked, though. And she gave me what she thought I needed, which -- outside of food and a roof over my head -- was close to nothin'. Fuck what I wanted. No, she wasn't on crack or dope or a fuckin' drunk. Maybe she shoulda been. But I can't give ya no fucked-up tales of watchin' her smoke up, shoot up, or snort up. And I can't tell ya jack 'bout no tricks or johns runnin' up in her pussy all hours of the day and night. Sellin' her ass wasn't her thing. Yeah, she went through men like water, and moved one in after the other...okay, and? That's her story, not mine. She did her thing, and I learned to do mine.

Yeah, I knew...uh, I mean, know, who the fuck my father was/is, so? It ain't like the nigga ever did anything for me. Besides hustlin' nd robbin' niggas, the only good thing he ever did was donate his nut to my moms, a half-Spanish, half-black chick who spit me outta her hairy pussy when she was sixteen. Other than that, goin' in and out of prison and breakin' my mom's heart was the only thing his sorry ass was good for. Be clear. I ain't hatin' on dude. He was a street nigga who tried to get in where he fit in. From breakin' into cars to burglaries to drug dealin' to numerous parole violations to runnin' with known felons to fuckin' any unsuspectin' trick willin' to spread open her legs and her wallet, he was a rebel, down for whateva.

The hood raised him. Bitches praised him. And the streets and pussy were what turned their backs on him when his black ass got popped fifteen years ago. Now he was on lock for another ten years for an aggravated assault he didn't commit, and drug charges for shit that wasn't his. But the nigga ain't a snitch. Turnin' state's evidence on his niggas was outta the question. That's the code he lived by, and one he'd proudly die by. That's how the real niggas get down. So fuck what ya heard 'bout me needin' him. A bitch can't miss what she never had! Other than sharin' the same DNA, the only thing dude and I will ever have in common is our love for the benjamins. Believe that!

So, you wanna know what's really good with a bitch like me? Then I'll tell ya. I'ma give it to ya straight, no chaser -- as real and as raw as it gets. I fuck for sport. But I murder for business. And because most muhfuckas are so driven by lust and the desire for good pussy and a slow, wet dick suck, it doesn't take much for me to lure 'em into their own death traps. My mission is simple: Wet a nigga's dick, then put a bullet in his skull, or in his chest, just before he cracks his nut. That's right. Send his ass to his grave with his eyes rolled up in his head and a smile on his face before he ever knows what hit his ass.

Make no mistake. This shit ain't 'bout love. It ain't 'bout revenge. And it surely ain't personal. In this business, there's no time for compassion or sympathy. And there's no room for regret. It's 'bout clockin' that paper. And a bitch like me gets paid by the body. Welcome to the Kat Trap, muhfuckas...it's 'bout to get poppin'!