Items related to Everything Bad is Good for You: How Today's Popular...

Johnson, Steven Everything Bad is Good for You: How Today's Popular Culture is Actually Making Us Smarter

Everything Bad is Good for You: How Today's Popular Culture is Actually Making Us Smarter 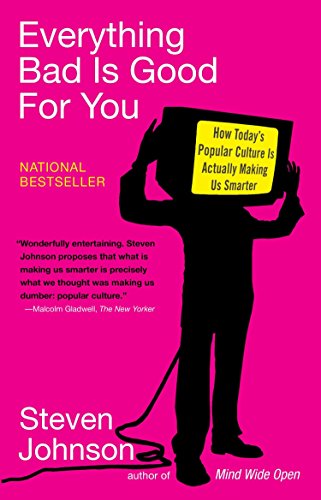 Forget everything you’ve ever read about the age of dumbed-down, instant-gratification culture. In this provocative, unfailingly intelligent, thoroughly researched, and surprisingly convincing big idea book, Steven Johnson draws from fields as diverse as neuroscience, economics, and media theory to argue that the pop culture we soak in every day—from Lord of the Rings to Grand Theft Auto to The Simpsons—has been growing more sophisticated with each passing year, and, far from rotting our brains, is actually posing new cognitive challenges that are actually making our minds measurably sharper. After reading Everything Bad is Good for You, you will never regard the glow of the video game or television screen the same way again.

With a new afterword by the author.

In his fourth book, Everything Bad Is Good for You, iconoclastic science writer Steven Johnson (who used himself as a test subject for the latest neurological technology in his last book, Mind Wide Open) takes on one of the most widely held preconceptions of the postmodern world--the belief that video games, television shows, and other forms of popular entertainment are detrimental to Americans' cognitive and moral development. Everything Good builds a case to the contrary that is engaging, thorough, and ultimately convincing.

The heart of Johnson's argument is something called the Sleeper Curve--a universe of popular entertainment that trends, intellectually speaking, ever upward, so that today's pop-culture consumer has to do more "cognitive work"--making snap decisions and coming up with long-term strategies in role-playing video games, for example, or mastering new virtual environments on the Internet-- than ever before. Johnson makes a compelling case that even today's least nutritional TV junk food–the Joe Millionaires and Survivors so commonly derided as evidence of America's cultural decline--is more complex and stimulating, in terms of plot complexity and the amount of external information viewers need to understand them, than the Love Boats and I Love Lucys that preceded it. When it comes to television, even (perhaps especially) crappy television, Johnson argues, "the content is less interesting than the cognitive work the show elicits from your mind."
Johnson's work has been controversial, as befits a writer willing to challenge wisdom so conventional it has ossified into accepted truth. But even the most skeptical readers should be captivated by the intriguing questions Johnson raises, whether or not they choose to accept his answers. --Erica C. Barnett

Steven Johnson is the bestselling author of eleven books, including Where Good Ideas Come From, Wonderland, and The Ghost Map. He's the host and co-creator of the Emmy-winning PBS/BBC series How We Got To Now, and the host of the podcast American Innovations. He lives in Brooklyn and Marin County, California with his wife and three sons.

1. EVERYTHING BAD IS GOOD FOR YOU:

2. EVERYTHING BAD IS GOOD FOR YOU:

3. EVERYTHING BAD IS GOOD FOR YOU:

4. Everything Bad is Good for You: How Today's Popular Culture is Actually Making Us Smarter

5. EVERYTHING BAD IS GOOD FOR YOU:

6. EVERYTHING BAD IS GOOD FOR YOU:

7. EVERYTHING BAD IS GOOD FOR YOU:

8. EVERYTHING BAD IS GOOD FOR YOU:

9. Everything Bad Is Good for You : How Today's Popular Culture Is Actually Making Us Smarter

10. Everything Bad is Good for You: How Today's Popular Culture is Actually Making Us Smarter