Items related to You Lost Me There

Baldwin, Rosecrans You Lost Me There

You Lost Me There 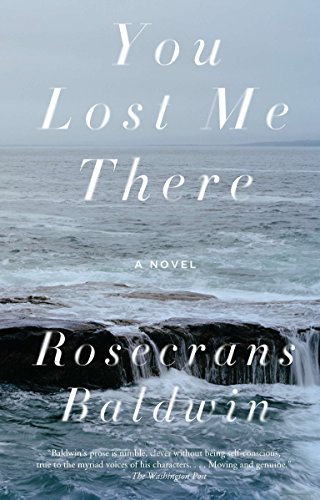 By turns funny, charming, and tragic, Rosecrans Baldwin's debut novel introduces leading Alzheimer's researcher Dr. Victor Aaron, who spends his days alternating between long hours in the lab and running through memories of his late wife, Sara. He's preserved their marriage as a perfect, if tumultuous, duet between two opposite but compatible souls. Until the day he discovers a series of index cards in Sara's handwriting that chronicle the major "changes in direction of their marriage." Suddenly this eminent memory expert finds his faith in memory itself unraveling, and he must, along with his support network of strong women-from his lab assistant to Aunt Betsy, the doddering doyenne of the island where they all live-determine a way to move on.

By turns funny, charming, and tragic, Rosecrans Baldwin's debut novel takes us inside the heart and mind of Dr. Victor Aaron, a leading Alzheimer's researcher at the Soborg Institute on Mount Desert Island in Maine. Victor spends his days alternating between long hours in the sterile lab and running through memories of his late wife, Sara. He has preserved their marriage as a sort of perfect, if tumultuous, duet between two opposite but precisely compatible souls. But one day, in the midst of organizing his already hyperorganized life, Victor discovers a series of index cards covered in Sara's handwriting. They chronicle the major changes in direction of their marriage, written as part of a brief fling with couples counseling. Sara's version of their great love story is markedly different from his own, which, for the eminent memory specialist, is a startling revelation. Victor is forced to reevaluate and relive each moment of their marriage, never knowing if the revisions will hurt or hearten. Meanwhile, as Victor's faith in memory itself unravels, so too does his precisely balanced support network, a group of strong women---from his lab assistant to Aunt Betsy, doddering doyenne of the island---that had, so far, allowed him to avoid grieving.

Rosecrans Baldwin is a founding editor of the popular website The Morning News, host of the annual “Tournament of Books.” His work has appeared in New York Magazine, The Nation, on NPR’s “All Things Considered,” and he currently writes “The Digital Ramble,” for The Moment, a New York Times blog. He lives in Chapel Hill, North Carolina with his wife.

1. You Lost Me There

2. You Lost Me There