Items related to The Ultra Violets 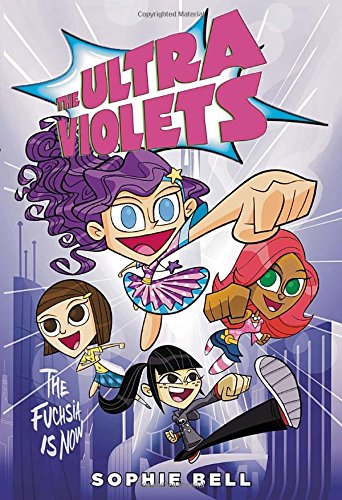 A smart superhero book for girls with plenty of glitter--perfect for fans of The Powerpuff Girls.

It all started with the mysterious purple goo . . .

What happens when four best friends find themselves splattered with a bubbling, genetically altering substance during a seemingly innocent sleepover in a secret, see-through, high-tech, futuristic lab? They develop superpowers, that's what! Iris, Cheri, Scarlet, and Opaline are destined to become . . .

CHERI: A girly girl on platform rollerskates who's never met a rescue puppy or a nail polish she didn’t immediately-and-madly love.

OPALINE: Loveable, huggable, supershy, sweet as pie . . . or is she?

THE FUCHSIA IS NOW!

If Sophie Bell could have just one superpower, it would be to control the frizzies come rain, snow, tornado, or monsoon. Either that or invisible-flying. Like the Ultra Violets, she once had purple hair, and it came at a terrible cost—about fifteen dollars per extension. She lives with many inappropriate shoes in Brooklyn, New York.

Gr 5-7-While on a sleepover at a supersecret lab, four second-grade friends are accidentally splashed with an experimental chemical. At the time, it doesn't seem too important. But, four years later, when the girls reunite in middle school, the "heliotropium" exposure is producing astonishing changes. Iris has developed purple hair and the corresponding ability to affect colors around her. Scarlet has gained phenomenal dancing talents, and Cheri has extraordinary math powers and can communicate with animals. Only Opal seems to have been left out-and she's increasingly bitter about it. The other girls assure her that they are all still "besties," but then Opal mistakenly assumes that Cheri is using superskills to steal the boy whom she wants. Opal breaks with the group just as her own terrifying storm-creating powers manifest. Meanwhile, SyncCity is being invaded by weird human-animal mutants, and the source seems to be experimental beauty lab BeauTek in the shuttered Mall of No Returns. Opal arranges a class field trip to BeauTek, where she assumes control of the mutant forces. Can the remaining Ultra Violets rescue their friend from the dark side in time to save the city? Readers may be attracted to the anime-style illustrations, flashy cover art, and purple-inked text, but the episodic plot is often a challenge to follow, especially as the author frequently breaks page in mid-action to insert side comments. Many plot threads are left unresolved, indicating a planned sequel. The self-consciously "girlie" dialogue is replete with text-message acronyms and cutesy pop-culture references. There is room in the superhero pantheon for an all-girl team, but the Ultra Violets spend more time licking lollipops and humiliating cafeteria bullies than seeking justice.-Elaine E. Knight, Lincoln Elementary Schools, ILα(c) Copyright 2013. Library Journals LLC, a wholly owned subsidiary of Media Source, Inc. No redistribution permitted.