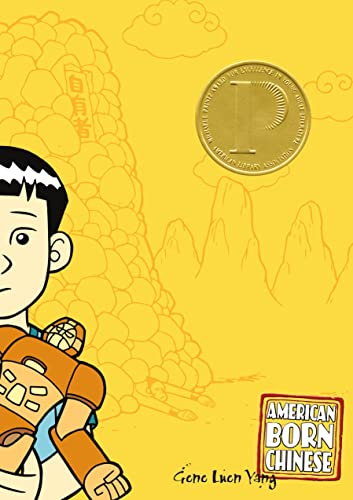 Gene Luen Yang is the National Ambassador for Young People's Literature and is a MacArthur Fellow, a recipient of what's popularly known as the MacArthur "Genius" Grant.

A tour-de-force by New York Times bestselling graphic novelist Gene Yang, American Born Chinese tells the story of three apparently unrelated characters: Jin Wang, who moves to a new neighborhood with his family only to discover that he's the only Chinese-American student at his new school; the powerful Monkey King, subject of one of the oldest and greatest Chinese fables; and Chin-Kee, a personification of the ultimate negative Chinese stereotype, who is ruining his cousin Danny's life with his yearly visits. Their lives and stories come together with an unexpected twist in this action-packed modern fable. American Born Chinese is an amazing ride, all the way up to the astonishing climax.

This title has Common Core Connections

Review:
Indie graphic novelist Gene Yang's intelligent and emotionally challenging American Born Chinese is made up of three individual plotlines: the determined efforts of the Chinese folk hero Monkey King to shed his humble roots and be revered as a god; the struggles faced by Jin Wang, a lonely Asian American middle school student who would do anything to fit in with his white classmates; and the sitcom plight of Danny, an All-American teen so shamed by his Chinese cousin Chin-Kee (a purposefully painful ethnic stereotype) that he is forced to change schools. Each story works well on its own, but Yang engineers a clever convergence of these parallel tales into a powerful climax that destroys the hateful stereotype of Chin-Kee, while leaving both Jin Wang and the Monkey King satisfied and happy to be who they are.

Yang skillfully weaves these affecting, often humorous stories together to create a masterful commentary about race, identity, and self-acceptance that has earned him a spot as a finalist for the National Book Award for Young People. The artwork, rendered in a chromatically cool palette, is crisp and clear, with clean white space around center panels that sharply focuses the reader's attention in on Yang's achingly familiar characters. There isn't an adolescent alive who won't be able to relate to Jin's wish to be someone other than who he is, and his gradual realization that there is no better feeling than being comfortable in your own skin.--Jennifer Hubert

From the Author:
I started American Born Chinese about five years into my comics career. (Though at the time, it was really more of a vocation since I wasn't making any money at it.) Up 'til then, I'd done a couple of stories with Asian-American protagonists, but I never dealt with the Asian-American experience head-on. Since my own ethnic heritage is such an important part of how I understand myself, I knew I wanted to. I came up with three ideas and couldn't decide which one was the best. American Born Chinese is me doing all three at once.

Book Description Paperback. Condition: New. Gene Luen Yang (illustrator). Revised ed. Language: English. Brand new Book. This is a tour-de-force new work by rising indie comics star Gene Yang. "American Born Chinese" maps the adolescent Chinese-American experience through three separate but interwoven stories. One story centres on Jin Wang, a Chinese-American student at an all-white California high school. Jin is plagued by jocks and bullies, so when another Chinese student transfers to the school, Jin wants nothing to do with him. Next is a comic update of the legendary story of the Monkey King, an ancient Chinese morality tale. Finally, there's the gross and surreal stereotype of Chin-Kee, the ultimate negative Chinese cliche, complete with a sitcom-style "laugh track". These three apparently unrelated tales come together in an astonishing climax - all with a mighty blast of humour, surprising poignancy and skilled artistry. Seller Inventory # AA99781596431522