Items related to Never Make the First Offer: And Other Wisdom No Dealmaker...

Boswell, John; Dell, Donald Never Make the First Offer: And Other Wisdom No Dealmaker Should Be Without (Your Coach in a Box)

Never Make the First Offer: And Other Wisdom No Dealmaker Should Be Without (Your Coach in a Box) 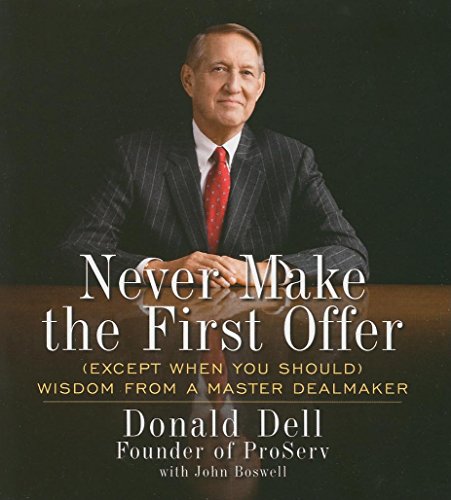 Donald Dell is a legend in professional sports. As one of the first agents to represent athletes, he's been negotiating mega-deals for almost forty years with a hugely successful record on behalf of stars like Arthur Ashe, Michael Jordan, Jimmy Connors, Patrick Ewing, Stan Smith, and Boomer Esiason.

Now Dell shares behind-the-scenes stories of his dealings with some of the most powerful sports owners and executives. He brings the inner workings of the negotiating room to life and offers lessons that listeners can apply to their own tough situations. A sample:

Never make the first offer: You're not seeking an offer at all; you are seeking information.
Business is emotional: If you are less than genuine. people will pick up on it, which is much worse than losing your temper every now and then.
Know your audience: I finally figured out the key to Jimmy Connors-play to his stubbornness. Don't force Jimmy to do something and he just might do it.
Decide what's important: Something extremely important to the other side may be trivial to you, in which case you can gain leverage by giving it to them.

Donald Dell is the cofounder of the Association of Tennis Professionals and the founder of ProServ, a leading sports agency that has represented hundreds of star athletes. He is also a former captain of the U.S. Davis Cup tennis team, the founder of the Legg Mason Tennis Classic, and a television tennis commentator. He was elected to the International Tennis Hall of Fame in 2009.
John Boswell has written or co-written seventeen books.

Starred Review. Legendary sports agent Dell reveals the secrets to successful negotiating in this spellbinding, behind-the-scenes look at deal making in the high stakes world of professional athletics. The treasure trove of practical advice is backed up by mesmerizing tales of the deals Dell closed on behalf of such stars as Arthur Ashe, Michael Jordan, Jimmy Connors and Patrick Ewing. The author drives home simple yet powerful business lessons: he recalls how his negotiation for a new Michael Jordan basketball shoe reached an impasse until Nike exec Peter Moore blurted out a clear concept for a line called Air Jordan, which subsequently became the biggest licensing deal in history; and his own temper cost him a deal signing a promising young tennis star. Sidebars offer advice from athletes, politicians and dealmakers including former senator and Basketball Hall of Fame player Bill Bradley and former senator George Mitchell, who negotiated the Good Friday peace agreement of 1998 in Northern Ireland. Dell reveals that successful deal making requires strong relationships, trust, self-awareness—the very qualities his star clients embody. (Aug.)
Copyright © Reed Business Information, a division of Reed Elsevier Inc. All rights reserved.

1. Never Make the First Offer: And Other Wisdom No Dealmaker Should Be Without (Your Coach in a Box)