Items related to Writing New York: A Literary Anthology: A Library of... 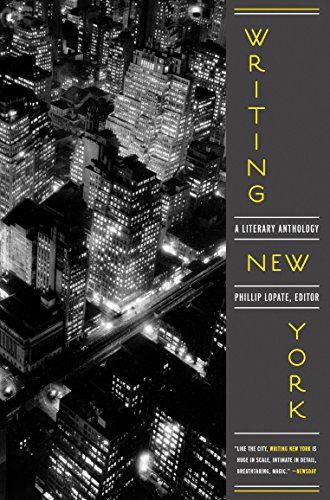 ?Few cities,? writes Phillip Lopate in his introduction to this historic anthology, ?have inspired as much great writing as New York.? Here Lopate and The Library of America present a sweeping literary portrait of the city as seen through the eyes of over a hundred writers. Residents and tourists, novelists and poets, architects, politicians, social reformers, naturalists, humorists?in unexpected and dazzling ways the writers in this volume take on the challenge of capturing New York?s enduring spirit, its constantly changing public spectacle, its gossip, amusements, hard-luck stories, and tragedies. This paperback edition includes an expanded introduction and additional selections be Don DeLillo, Colson Whitehead, and Vijay Seshadri, bringing the story up to the present.

Few cities on earth exert New York's pull on the literary imagination. There may be nothing like Paris in springtime, or a foggy day in London Town, but for sheer page volume, neither of these can rival the city that never sleeps. In celebration of Greater New York's centenary, the Library of America has assembled almost 200 years' worth of literary Gothamiana--no small task, given the scope from which they had to choose. The result is a hefty, pleasingly eclectic anthology that works as both historical document and literary revelation. Editor Phillip Lopate has wisely chosen to include both the familiar (Melville's "Bartleby the Scrivener," Whitman's "Crossing Brooklyn Ferry") and the unknown (the diaries of English actress Fanny Kemble). Edith Wharton, Oscar Hijuelos, Henry Miller, Willa Cather, Tom Wolfe, Hart Crane: these are only a few of the writers who offer up their takes on the city, in terms that vary from nostalgic to cynical, romantic to tart. "I want this new novel to be delicate and cutting--nothing will cut New York but a diamond," observes Dawn Powell; "I don't like the city better, the more I see it, but worse," writes a homesick Thoreau. F. Scott Fitzgerald mourns the giddy New York of 1919, his "lost city," while E.B. White lauds the metropolis for its dual bequests, "the gift of loneliness and the gift of privacy." Vibrant, opinionated, more than a little bit overwhelming, the anthology is a fitting tribute to a city whose most enduring characteristic is the speed at which it can change. In the words of E.B. White, "A poem compresses much in a small space and adds music, thus heightening its meaning. The city is like poetry: it compresses all life, all races and breeds, into a small island and adds music and the accompaniment of internal engines."

Phillip Lopate, editor, is an essayist, novelist, and poet, whose books include Bachelorhood; Against Joie de Vivre; Portrait of My Body; and Waterfront: A Journey Around Manhattan. He has edited The Art of the Personal Essay and, for The Library of America, Writing New York: A Literary Anthology. His selected film criticism appeared in Totally Tenderly Tragically, and he currently serves on the selection committee of the New York Film Festival.