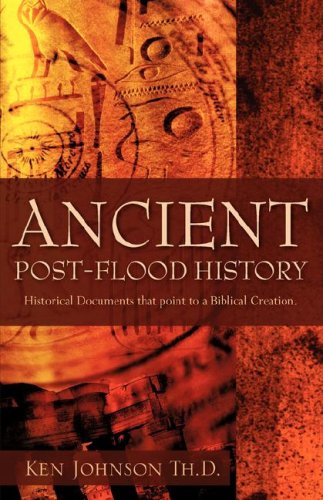 This book is a Christian timeline of ancient post-Flood history based on Bible chronology, the early church fathers, and ancient Jewish and secular history. This can be used as a companion guide in the study of Creation science. This revised edition adds the background history of nine new countries. Learn the true origins of the countries and people of France, Germany, Denmark, Sweden, Ireland, Scotland, Greece, Italy, Russia, Egypt, Israel, Iraq, Iran, China, the Arabs, the Kurds, and more. Some questions answered: Who were the Pharaohs in the times of Joseph and Moses? When did the famine of Joseph occur? What Egyptian documents mention these? When did the Exodus take place? When did the kings of Egypt start being called "Pharaoh" and why? Who was the first king of a united Italy? Who was Zeus and where was he buried? Where did Shem and Ham rule and where were they buried? How large was Nimrod's invasion force that set up the Babylonian Empire, and when did this invasion occur? What is Nimrod's name in Persian documents? How can we use this information to witness to unbelievers? Brought to you by Biblefacts Ministries, Biblefacts.org

Ken Johnson is an author and lecturer who speaks on a variety of issues related to Bible prophecy, ancient history, and the apostasy that will form in the church in the last days. He received a Doctorate in Theology from the Christian College of Texas, Texarkana Tx, in 1989. He is also the author of the website Biblefacts.org