Items related to History Is Wrong 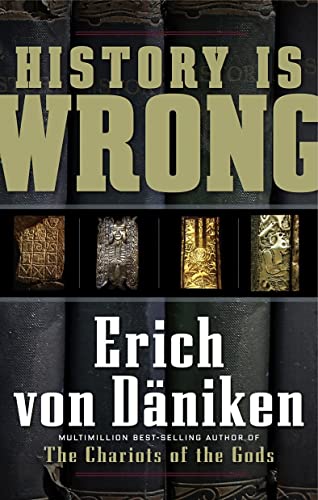 Erich von Daniken again shows his flair for revealing the truths that his contemporaries have missed. After closely analyzing hundreds of ancient and apparently unrelated texts, he is now ready to proclaim that human history is nothing like the world religions claim--and he has the proof! In History is Wrong, Erich von Daniken takes a closer look at the fascinating Voynich manuscript, which has defied all attempts at decryption since its discovery, and makes some fascinating revelations about the equally incredible Book of Enoch. Von Daniken also unearths the intriguing story of a lost subterranean labyrinth in Ecuador that is said to be home to an extensive library of thousands of gold panels. He supplies evidence that the metal library not only has links to the Book of Enoch but also to the Mormons, who have spent decades searching for it, believing it to contain the history of their forefathers. And what about the mysterious lines in the desert of Nazca that look like landing strips when viewed from the air? Archeologists claim they are ancient procession routes. "Think again!" cries von Daniken as he reveals the data that the archeologists never even thought to check. History is Wrong will challenge your intellect...and maybe a few long-held beliefs. This is Erich von Daniken's best book in years!

Erich von Däniken is arguably the most widely read and most-copied nonfiction author in the world. He published his first (and best-known) book, Chariots of the Gods, in 1968. The worldwide best seller was followed by 40 more books, including the recent best sellers Twilight of the Gods, History Is Wrong, Evidence of the Gods, Remnants of the Gods, and Odyssey of the Gods (all published by New Page Books). His works have been translated into 28 languages and have sold more than 65 million copies. Several have also been made into films. Von Däniken's ideas have been the inspiration for a wide range of television series, including the History Channel's hit Ancient Aliens. His research organization, the A.A.S.R.A./legendarytimes.com (Archaeology, Astronautics & SETI Research Association), comprises laymen and academics from all walks of life. Internationally, there are about 10,000 members. He lives in Switzerland but is an ever-present figure on the international lecture circuit, traveling more than 100,000 miles a year.

6. History Is Wrong (Paperback or Softback)