Items related to The Environmental Case: Translating Values Into Policy

Layzer, Judith A. The Environmental Case: Translating Values Into Policy 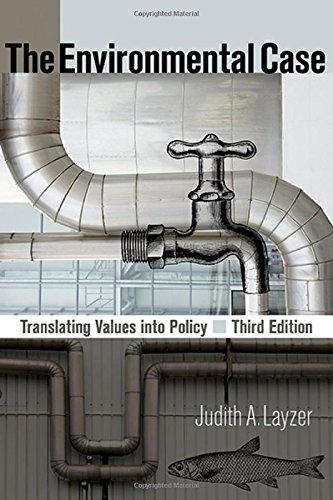 Environmental policy cannot be seen in just black and white, but instead contains many shades of gray. Environmental battles―even the most heated―are essentially conflicts among those with fundamentally different values, and how problems are framed in politics plays a central role in shaping how these values are translated into policies. Judith Layzer explores these two main themes in environmental policy making in the anticipated third edition of The Environmental Case.

Through its 16 carefully constructed cases, the book gives readers a first-hand look at some of the most interesting and illuminating controversies in U.S. environmental policy making. New to this edition, Layzer expands the final section of her book to consider the issue of resilience in the face of a changing climate. This third edition features fully revised and updated case studies, as well as three brand-new cases: Cape Wind and Alternative Energy, Ecosystem-Based Management in the Chesapeake Bay, and the restoration of New Orleans after Hurricane Katrina. Lazyer provides maps, tables, figures, questions to consider, recommended readings, and useful websites to help students think critically about environmental policy and to facilitate further research.

Judith A. Layzer was professor of environmental policy in the Department of Urban Studies and Planning at the Massachusetts Institute of Technology (MIT) until her death in 2015. She earned a Ph.D. in political science at MIT. After four years at Middlebury College in Vermont she returned to MIT, where she taught courses in science and politics in environmental policymaking, ecosystem-based management, food systems and the environment, urban sustainability, energy and environmental politics, and public policy.

Layzer was an athlete as well as a scholar. In addition to having finished five Boston marathons, she shared nine national championship titles and one world championship trophy with her teammates on Lady Godiva, formerly Boston’s premier women’s Ultimate Frisbee team.

The Environmental Case continues to lead the field of undergraduate-friendly texts, providing theoretical frameworks and detailed case studies of domestic and international environmental events. The cases, which include Love Canal, environmental justice, fishing practices, and urban sprawl, include data from a variety of sources, questions for discussion, recommended readings, and relevant web sites. The book facilitates environmental politics courses by providing multiple cases in a single, affordable text, and I believe it will continue to serve as a standard for the future

Judith Layzer’s The Environmental Case is an indispensable book for my environmental policy and politics course. The introduction develops the guiding framework, namely that divergent problem definitions ― stemming from intractable value conflicts ― remain at the heart of U.S. environmental battles. Layzer’s fascinating and well chosen case studies are so versatile and valuable that her book now serves as a replacement for ― rather than a supplement to ― the leading textbook in my course