King John: Treachery and Tyranny in Medieval England: The Road to Magna Carta 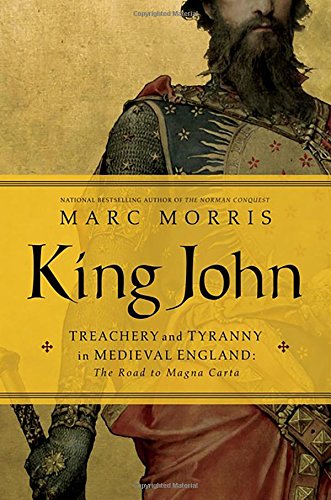 King John is familiar to everyone as the villain from the tales of Robin Hood―greedy, cowardly, despicable, and cruel. But who was the man behind the legend? Was he truly a monster, or a capable ruler cursed by bad luck? In this new book bestselling historian Marc Morris draws on contemporary chronicles and the king's own letters to bring the real King John vividly to life.

John was dynamic, inventive and relentless, but also a figure with terrible flaws. In two interwoven stories, we see how he went from being a youngest son with limited prospects to the ruler of the greatest dominion in Europe, an empire that stretched from the Scottish border to the Pyrenees. His rise to power involved treachery, rebellion and murder. His reign saw oppression on an almost unprecedented scale: former friends hounded into exile and oblivion; Wales, Scotland and Ireland invaded; the greatest level of financial exploitation since the Norman Conquest. A quarrel with the pope led to the king being excommunicated and England being placed under Interdict. John's tyrannical rule climaxed in conspiracy and revolt, and his leading subjects famously forced him to issue Magna Carta, a document binding him and his successors to behave better in future. The king's rejection of the charter led to civil war and foreign invasion, bringing his life to a disastrous close.

Authoritative and dramatic, Marc Morris's King John offers a compelling portrait of an extraordinary man, whose reign marked a momentous turning point in the history of Britain and Europe. 16 pages of color and B&W illustrations

Marc Morris is a historian and broadcaster specializing in the Middle Ages. He is the author of A Great and Terrible King, King John, and the Wall Street Journal and USA Today bestselling The Norman Conquest. He lives in England.

“In lively, cultured prose, English historian Morris (The Norman Conquest) investigates the complex road taken by 'Bad King John' to the signing of the Magna Carta in June of 1215. Full of fascinating details, with the added bonus of a translation of the full Magna Carta.”
- Publishers Weekly

1. King John: Treachery and Tyranny in Medieval England: The Road to Magna Carta

2. King John: Treachery and Tyranny in Medieval England: The Road to Magna Carta