Items related to Fears, Hopes, and Dreams: (A Story of Life in Haiti)

Horning, Katherine J. Fears, Hopes, and Dreams: (A Story of Life in Haiti)

Fears, Hopes, and Dreams: (A Story of Life in Haiti) 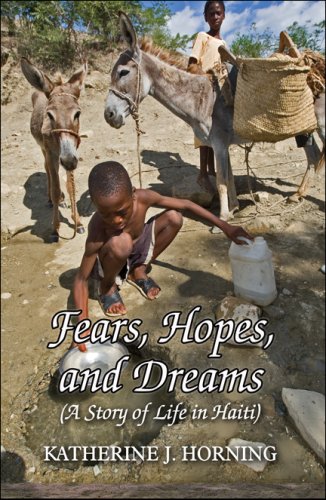 Fourteen-year-old Jaron helps his mother get to the NW Haiti Christian Mission where she gives birth to her eighth child. While awaiting the birth of the baby, Jaron meets American short-term missionaries and begins to question his faith in the Voodoo religion of his country. He becomes acquainted with the missionary staff, meets teenagers from America whose strong Christian beliefs influence him, and observes the activities of the mission as it serves his fellow Haitians of all ages. He struggles with his family’s poverty, the violent weather of the Caribbean, his father’s escape to Miami, the placement of two brothers in the mission orphanage, his little brother’s autistic behavior, and his own desire to better himself through education. Through the influence of the people he meets, he learns more about Christianity and eventually turns to God in prayer.

Book Description Paperback. Condition: Good. Connecting readers with great books since 1972. Used books may not include companion materials, some shelf wear, may contain highlighting/notes, may not include cdrom or access codes. Customer service is our top priority!. Seller Inventory # S_309138796