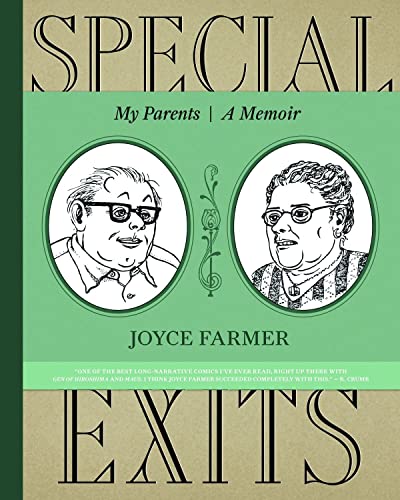 Special Exits chronicles the decline of Lara (Farmer’s stand-in)’s elderly parents (Lars and Rachel)’s health. Set in southern Los Angeles (which makes for a terrifying sequence as blind Rachel and ailing Lars are trapped in their home without power during the 1992 Rodney King riots), backgrounds and props are lovingly detailed: these objects serve as memory triggers for Lars and Rachel, even as they eventually overwhelm them and their home, which the couple is loathe to leave. Rendered in thin, confident pen lines, Special Exits is laid out in an eight-panel grid, which creates a leisurely storytelling pace that not only helps to convey the slow, inexorable decline in Lars’ and Rachel’s health, but perfectly captures the timbre of the exchanges between a long-married couple: the affectionate bickering; their gallows humor; their querulousness as their bodies break down. Though Lars and Rachel are the protagonists of Special Exits, Farmer makes her voice known through creative visual metaphors and in her indictment of the careless treatment of the elderly in nursing homes.

About the Author:
Joyce Farmer lives in Laguna Beach, CA.
Review:
“One of the best long-narrative comics I’ve ever read, right up there with Gen of Hiroshima and Maus. It had a powerful effect on me... towards the end I actually found myself moved to tears.”
- R. Crumb

“(Starred Review) Emotional and physical crises are depicted naturalistically, never hyped up to tug the heartstrings or extort pity, and the parents’ personalities are convincingly and lovingly evoked. The end-of-life literature is vast and mostly practical and advisory. Though not without value as counsel, Farmer’s contribution is primarily a work of art, moving and beautiful.”
- Ray Olson, Booklist

“...Special Exits avoids cheap pity and piousness by doing what any good art should: focusing on specifics ― the ways in which Farmer’s parents slide into old age and ill health; the care they require and receive. That this is also a portrait of a strong marriage is an added benefit. Frank, never shying away from the awkward indignities of aging, Special Exits illuminates two lives, as well as that of the author’s.”
- Ken Tucker, Entertainment Weekly

“In this lightly fictionalized and unflinching account of the author's parents, Lars and Rachel stumble toward the end of life with unpredictable successes, setbacks, and flashes of joy.... An excellent alert for those new to the path (for themselves or for relatives) and a validation for those already familiar with this normal yet seemly so abnormal life stage.”
- Martha Cornog, Library Journal

“Joyce Farmer... recently has emerged as one of the most provocative voices in the comics and graphic-literature landscape. Her debut book, the 208-page illustrated memoir Special Exits, chronicling the slow, freaky decline and ultimate death of her elderly parents, ...is an almost uncomfortably honest memoir that’s dense with details. It’s also layered with meaning and sub-themes.”
- Deborah Vankin, Los Angeles Times

“I finally read Special Exits last weekend. And I am here to tell you: It was tough. It was not fun. But it was truthful. It was specific. And it ... helped. In this, it was utterly unlike the book on grieving that a well-meaning relative pressed into my hands.... Special Exits... is all about specificity... It's bracingly clear-eyed and unsentimental...”
- Glen Weldon, NPR

“...[T]he impressive thing about [Special Exits] is that, despite depressing subject matter, it’s extremely readable and fairly funny. Yes, you’ll think about the horrors of getting old and failing to maintain your independence, not to mention the even scarier prospect of taking care of your own parents. But if Farmer’s book is meant to soothe your fears, it kind of works.”
- Hillary Brown, Paste

“[Special Exits] was fueled by Farmer's personal outrage at the unacceptable treatment of her elderly parents at the hands of medical and nursing home establishments. And she'll pooh-pooh the idea that making the book was psychological therapy of any sort. 'It was in no way cathartic. It was really, really depressing,' she told me any number of times. This is classic Joyce Farmer, drawing, writing, and satirizing taboo and socially risky subjects.”
- Kathleen Vanesian, Phoenix New Times

“Starred Review: Underground feminist comic artist Farmer’s account of how she looked after her aging parents is a quiet wonder....The story is stunning for its anti-sentimental realism, as well as for the glimpses of fantasy...that flicker by like ghosts.”
- Publishers Weekly

“...Joyce Farmer’s Special Exits depicts old age as a wild, lurching ride from medical crises to euphoric nostalgia to an eerie calm as the end draws near. [...] Aging and dying are rare topics in literature and cinema, let alone in comics, which makes Special Exits an automatic standout. But it would be an excellent book even if the shelves were full of fictionalized memoirs about elder care.”
- The A.V. Club