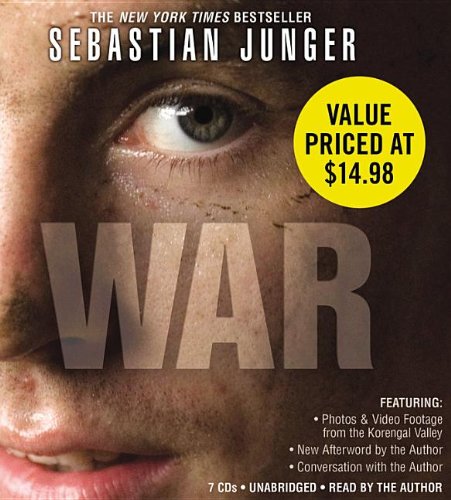 In WAR Sebastian Junger gives breathtaking insight into the truths of war-- the fear, the honor, and the trust among men. His on-the-ground account follows a single platoon through a 15-month tour of duty in the most dangerous outpost in Afghanistan's Korengal Valley. Through the experiences of these young men at war, he shows what it means to fight, to serve, and to face down mortal danger on a regular basis.

Evan Thomas is one of the most respected historians and journalists writing today. He is the author of The War Lovers. Sebastian Junger is an internationally acclaimed author and a contributing editor to Vanity Fair, and has been awarded a National Magazine Award and an SAIS Novartis Prize for journalism. He is the author of War. Read on to see Sebastian Junger and Evan Thomas talk about their books.


Evan Thomas: War really is hell in your book. And yet it seems to captivate some of the men who fight it. Why?

Sebastian Junger: War is hell, as the saying goes--but it isn't only that. It's a lot of other things, too--most of them delivered in forms that are way more pure and intense than what is available back home. The undeniable hellishness of war forces men to bond in ways that aren't necessary--or even possible-- in civilian society. The closest thing to it might be the parent-child bond, but that is not reciprocal. Children are generally not prepared to die for their parents, whereas the men in a platoon of combat infantry for the most part are prepared to do that for each other. For a lot of men, the security of being enclosed by a group like that apparently outweighs the terrors of being in combat. During World War II, wounded soldiers kept going AWOL from the rear-base hospitals in order to rejoin their units on the front line. Clearly, for those men, rejoining their comrades was more important than the risk of death.

I'm curious about the reactions of foot soldiers in previous wars--the Civil War, the Spanish-American War. Are there letters from soldiers describing their anguish at being separated from their comrades? Or is this a modern phenomenon?

Thomas: In the Spanish-American War, Teddy Roosevelt made a cult out of his band of brothers, the Rough Riders, with the twist that he was bringing together gentlemen and cowboys to be true Americans. It was a romantic ideal but largely realized in the short (several week) war they fought--two battles, about a 15 percent casualty rate. The anguish you speak of was felt by the Rough Riders who were left behind--there was no room on the transports for roughly a third of Roosevelt's troopers, and they had to stay behind in Florida. Roosevelt wrote of them weeping over being separated from their comrades and missing out on the fight.

Roosevelt's war lust was sated by the Spanish-American War--for a time. He was not a notably bellicose president ("Talk softly but carry a big stick"). But when World War I came, he was almost pathologically driven to get back into the fight. He badgered President Wilson to let him raise a division. (Wilson, not wanting to create a martyr, said no.) Do you think the brotherhood of combat is in some ways addictive? What is it like for the soldiers and marines coming home?

Junger: It's amazing to see these same themes played out war after war. Politicians seize war for themselves, in some ways, and the public certainly holds them accountable for it--but the men who actually do the fighting are extraordinarily conflicted about it all. Only one man in the platoon I was with chose to leave the army after the deployment--Brendan O'Byrne, a main character in my book and now someone I consider a good friend. A few weeks ago we were hanging out with a family I know, and the talk turned to how rough the fighting was in Afghanistan. The mother, a woman in her thirties, asked Brendan if there was anything he missed about the experience. Brendan looked at her and said, without any irony, "Yes, almost all of it." I think what Brendan meant was that he missed an existence where every detail mattered--whether you tied your shoelaces, whether you cleaned your rifle--and you never had to question the allegiance of your friends. As Brendan said at another point, "There are guys in the platoon who straight-up hate each other-- but they'd all die for each other." Once they've been exposed to that, it's very hard for these guys to go back to a seemingly meaningless and ill-defined civilian life.

What happened to the men after they returned from their adventures with Roosevelt? Where did their lives lead them?

Thomas: The Rough Riders seem to have had endless reunions--but nothing like the PTSD so widely reported today. But perhaps that was because they were only fighting for about a month--a "splendid little war," as diplomat John Hay called it, apparently without irony. In The War Lovers, I was looking at another kind of camaraderie--the bond of men who want to get the country into war, who think that war will somehow restore the nation to spiritual greatness. Roosevelt and his best friend, Senator Henry Cabot Lodge, believed that America at the end of the 19th century had become "overcivilized"--that young men were turning soft and needed to somehow stir "the wolf rising in the heart," as Roosevelt put it. "All the great races have been fighting races," he said. It is significant that Roosevelt and Lodge, who pushed America to go to war with Spain in 1898, had written about war a great deal but never seen it. President William McKinley resisted; he had, as he noted, seen "the dead piled up at Antietam" in the Civil War. But the hawks in America were able to roll the doves, not for the last time.

Before The War Lovers I wrote Sea of Thunder, a book about the last naval battle of World War II, Leyte Gulf. I interviewed a number of survivors from the USS Johnston, a destroyer sunk in the battle after an unbelievably brave fight against superior forces. About 220 men went in the water but only about half of them were rescued. Because of a series of mistakes by the navy, they were left in the water for two and half days. The sharks came on the first night. For a long time, the survivors did not talk much about it. But then, after Tom Brokaw wrote The Greatest Generation, they began having reunions and speaking--almost compulsively--bout their experiences. The recollections are often harrowing. Yet even years later, when the veterans compiled their recollections in a book of about eighty oral histories, the veterans did not speak of their own fear, with only one exception, as I recall. Somehow acknowledging fear remained a taboo.

In War you write about fear in clinical and fascinating ways. Did you have a hard time getting men to talk about fear?

Junger: Getting the men to talk about fear was very hard because, well, I think they were afraid of it. Their biggest worry seemed to be failing the other men of the platoon in some way, and whenever someone got killed, a common reaction was to search their own actions for blame. They didn't want to believe that a good man could get killed for no reason; someone had to be at fault. During combat, their personal fear effectively got subsumed by the greater anxiety that they would fail to do their job and someone else would get killed. The shame of that would last a lifetime, and they would literally do suicidal things to help platoon mates who were in danger. The classic story of a man throwing himself on a hand grenade--certain death, but an action that will almost certainly save everyone else--is neither a Hollywood cliché nor something that only happened in wars gone by. It is something that happens with regularity, and I don't think it can be explained by "army training" or any kind of suicidal impulse. I think that kind of courage goes to the heart of what it means to be human and to affiliate with others in a kind of transcendent way. Of course, once you have experienced a bond like that, everything else looks pathetic and uninteresting. That may be one reason combat vets have such a hard time returning to society..

My guess is that the survivors of the USS Johnston were more traumatized by the deaths of their comrades than the prospect of their own death. Did any of them speak to that? What were their nightmares about? Has anyone studied the effect of that trauma on their lives--divorce rate, suicide rate, that kind of thing?

Thomas: They certainly described the deaths of their colleagues--who went mad from drinking seawater, or were killed by sharks, or died from untreated wounds or exposure (the seawater was about 86 degrees at night, cold if you spent all night immersed in it). Some just swam away and drowned. In one or two cases, men begged to be put out of their misery and were. There were complicated emotions over the deaths. There wasn't enough room on the rafts for all the men, so when one died, it made room for another. I am sure there was terrible guilt, but I didn't get into it with the survivors I interviewed. I don't think they were studied as a cohort. I think they were expected to go on with their lives, and I think by and large they did.

Nations are changed by war--but somehow, only for a time. We have a way of forgetting the horrors of war, in the need young men (and old men who missed war) have to some experience the greatest challenge to their manhood. This was true in the period I wrote about in The War Lovers, more than three decades after the Civil War: men like Roosevelt and Lodge wanted to somehow experience the glories of war, and not think too hard about the way wars often turn out in unexpected ways. I know in Cuba, where I visited to research The War Lovers, the Cubans don't think of the Americans as their liberators from Spanish rule, but rather as foreign invaders. That's unfair, and in many ways just plain wrong, but not so hard to understand if you put yourself in the shoes of a country occupied by a foreign army. Some things never change.

Sebastian Junger is the New York Times bestselling author of The Perfect Storm and A Death in Belmont. He is a contributing editor to Vanity Fair, and has been awarded a National Magazine Award and an SAIS Novartis Prize for journalism. He lives in New York City.