Items related to A Different Mirror for Young People: A History of Multicultu... 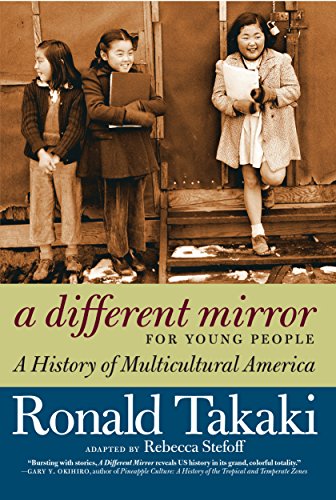 A longtime professor of Ethnic Studies at the University of California at Berkeley, Ronald Takaki was recognized as one of the foremost scholars of American ethnic history and diversity. When the first edition of A Different Mirror was published in 1993, Publishers Weekly called it "a brilliant revisionist history of America that is likely to become a classic of multicultural studies" and named it one of the ten best books of the year. Now Rebecca Stefoff, who adapted Howard Zinn's best-selling A People's History of the United States for younger readers, turns the updated 2008 edition of Takaki's multicultural masterwork into A Different Mirror for Young People.

Drawing on Takaki's vast array of primary sources, and staying true to his own words whenever possible, A Different Mirror for Young People brings ethnic history alive through the words of people, including teenagers, who recorded their experiences in letters, diaries, and poems. Like Zinn's A People's History, Takaki's A Different Mirror offers a rich and rewarding "people's view" perspective on the American story.

RONALD TAKAKI (1939-2009) was recognized as one of the foremost scholars of American ethnic history and diversity. He is the author of the multiple award-winning books Strangers from a Distant Shore: A History of Asian Americans and A Different Mirror: A History of Multicultural America.

REBECCA STEFOFF specializes in writing nonfiction for young readers, with a focus on scientific, historical, and literary subjects. She previously explored the subject of evolution in Charles Darwin and the Evolution Revolution(Oxford University Press, 1996) and the four-volume series Humans: An Evolutionary History (Marshall Cavendish Benchmark, 2010). Stefoff has also written on exploration, forensic investigation, and archaeology, among other topics. In addition to writing her own books, Stefoff has adapted several important nonfiction works for young audiences: A Young People's History of the United States, based on Howard Zinn's bestselling classic of progressive history; Before Columbus: The Americas in 1491, based on Charles C. Mann's ground-breaking new look at the archaeology of the pre-Columbian Americas; and A Different Mirror for Young People, based on a major work of scholarship by ethnic historian Ronald Takaki.

My Story, Our Story

I was going to be a surfer, not a scholar.

I was born and grew up in Hawaii, the son of a Japanese immigrant father and a Japanese-American mother who had been born on a sugarcane plantation. We lived in a working-class neighborhood where my playmates were Japanese, Chinese, Portuguese, Korean, and Hawaiian. We did not use the word multicultural, but that’s what we were: a community of people from many cultural, national, and racial backgrounds.

My father died when I was five, and my mother remarried a Chinese cook. She had gone to school only through the eighth grade, and my stepfather had very little education, but they were determined to give me a chance to go to college. My passion as a teenager, though, was surfing. My nickname was “Ten Toes Takaki,” and when I sat on my board and gazed at rainbows over the mountains and the spectacular sunsets over the Pacific, I wanted to be a surfer forever.

College was a culture shock for me. The student body was not very diverse, and my fellow students asked me, “How long have you been in this country? Where did you learn to speak English?” To them, I did not look like an American or have an American-sounding name. When I fell in love with one of those students, Carol Rankin, she told me that her parents would never approve of our relationship, because of my race.

Carol was right. Her parents were furious. Still, we decided to do what was right for us. When we got married, her parents reluctantly attended. Four years later, when our first child was born, her parents came to visit us in California. After I said, “Let me help you with the luggage, Mr. Rankin,” Carol’s father replied, “You can call me Dad.” His racist attitudes, it turned out, were not frozen. He had changed.

By that time I was working on my Ph.D. degree in American history. I became a college professor at the University of California in Los Angeles and taught the school’s first course in African American history. In 1971, I moved to the University of California at Berkeley to teach in a new Department of Ethnic Studies. In the decades that followed, I developed courses and degree programs in comparative ethnic studies, and I wrote several books about America’s multicultural history. My extended family, too, became a multicultural, mixed-race group that now includes people of Japanese, Vietnamese, English, Chinese, Taiwanese, Jewish, and Mexican heritage.

I have come to see that my story reflects the story of multicultural America—a story of disappointments and dreams, struggles and triumphs, and identities that are separate but also shared. We must remember the histories of every group, for together they tell the story of a nation peopled by the world. As the time approaches when all Americans will be minorities, we face a challenge: not just to understand the world, but to make it better. A Different Mirror studies the past for the sake of the future.

Different Mirror for Young People : A History of Multicultural America

A Different Mirror for Young People: A History of Multicultural America (Paperback or Softback)