Items related to A Message to Garcia

Hubbard, Elbert A Message to Garcia 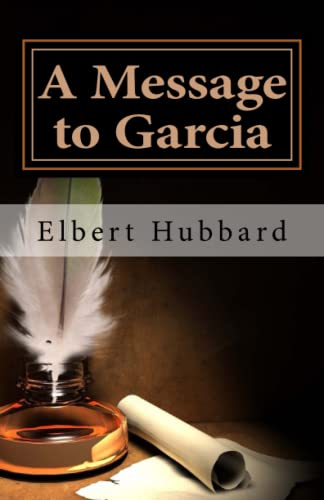 Reading and discussing Hubbard's small classic, "A Message to Garcia" should be a pre-requisite for anyone about to work anywhere for a boss. Much is written about leaders, and this book helps to fill the huge gap in what is written for and about followers. The few minutes it takes to read this book could change the rest of your life. I first read it back in 1985 and I re-read it frequently. Hubbard's inspiration for his "preachment" was an obscure but important event in the 1898 Spanish-American War. President McKinley needed someone to quickly deliver a message to an insurgent general somewhere in the jungles of Cuba. An army officer was recommended and McKinley personally handed the message to this officer with the mission to deliver the "message to Garcia." This officer's unhesitating acceptance of his mission with no superfluous questions and his subsequent completion of the mission is Hubbard's definition of an invaluable subordinate. Hubbard's lessons of initiative (doing the right thing without being told) and loyalty to yourself, your boss, and your organization (doing the right thing when told only once) are timeless and well told. Hubbard spoke to all leaders and subordinates when he wrote, "It is not book-learning young men need, nor instruction about this and that, but a stiffening of the vertebrae which will cause them to be loyal to a trust, to act promptly, concentrate their energies: do the thing – ‘Carry a message to Garcia.’"

From the Publisher:
Kessinger Publishing reprints over 1,500 similar titles all available through Amazon.com.
From the Inside Flap:
Elbert Hubbard wrote this in one hour after supper. Its management advice is both timeless and provocative. In the 111 years since it was written, more than 40 million copies have been distributed.