Items related to The Republic of Wine: A Novel

Yan, Mo The Republic of Wine: A Novel

The Republic of Wine: A Novel 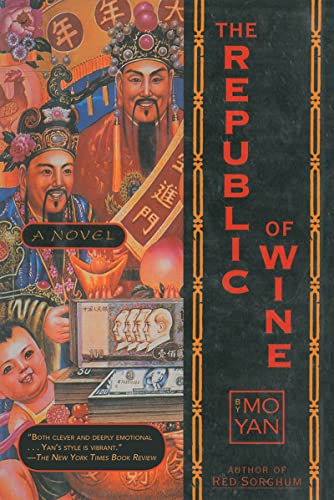 In this hypnotic epic novel, Mo Yan, the most critically acclaimed Chinese writer of this generation, takes us on a journey to a conjured province of contemporary China known as the Republic of Wine—a corrupt and hallucinatory world filled with superstitions, gargantuan appetites, and surrealistic events. When rumors reach the authorities that strange and excessive gourmandise is being practiced in the city of Liquorland (so named for the staggering amount of alcohol produced and consumed there), veteran special investigator Ding Gou'er is dispatched from the capital to discover the truth. His mission begins at the Mount Lou Coal Mine, where he encounters the prime suspect—Deputy Head Diamond Jin, legendary for his capacity to hold his liquor. During the ensuing drinking duel at a banquet served in Ding's honor, the investigator loses all sense of reality, and can no longer tell whether the roast suckling served is of the animal or human variety. When he finally wakes up from his stupor, he has still found no answers to his rapidly mounting questions. Worse yet, he soon finds that his trusty gun is missing.
Interspersed throughout the narrative—and Ding's faltering investigation—are letters sent to Mo Yan by one Li Yidou, a doctoral candidate in Liquor Studies and an aspiring writer. Each letter contains a story that Li would like the renowned author's help in getting published. However, Li's tales, each more fantastic and malevolent than the last, soon begin alarmingly to resemble the story of Ding's continuing travails in Liquorland. Peopled by extraordinary characters—a dwarf, a scaly demon, a troupe of plump, delectable boys raised in captivity, a cookery teacher who primes her students with monstrous recipes—Mo Yan's revolutionary tour de force reaffirms his reputation as a writer of world standing. Wild, bawdy, politically explosive, and subversive, The Republic of Wine is both mesmerizing and exhilarating, proving that no repressive regime can stifle true creative imagination.

The Republic of Wine is a novel Joseph Heller might have written had he been Chinese. As it is, the honor goes to Mo Yan, one of China's most respected writers. Set in the fictional province of Liquorland, this tall tale begins with a rumor of cannibal feasts featuring children as the delectable main course. In response, Chinese officials send special investigator Ding Gou'er to look into the allegations. He arrives by coal truck at the Mount Lao Coal Mine, where he meets the legendary Diamond Jin, Vice-Minister of the Liquorland Municipal Party Committee Propaganda Bureau, a man known for an epic ability to hold his booze. Almost at once, Ding's worst fears seem to be realized when he is invited to a special dinner, given enough alcohol to stun an ox, and then served what appears to be "a golden, incredibly fragrant little boy." Horrified, he attempts to make an arrest and in the ensuing confusion, accidentally puts a bullet in the main course.

The braised boy was now a headless boy. The unsmashed parts of his skull had tumbled to the edge of the table's second tier, between a platter of sea cucumbers and another of braised shrimp, pieces of head like shattered watermelon rind, or pieces of watermelon rind like shattered head, watermelon juices dripping like blood, or blood dripping like watermelon juices, soiling the tablecloth and soiling the people's eyes. A pair of eyes like purple grapes or purple grapes like a pair of eyes rolled around on the floor, one skittering behind the liquor cabinet, the other rolling up to a red serving girl, who squashed it with her foot.

Despite his hosts' explanation that the boy's arms are made of lotus root, his legs of ham sausage, and his head from a silver melon, Ding remains suspicious--until he is rendered so addled by wine that he ends up eating half an arm all on his own. As Ding continues his investigation, Mo Yan sends up the Chinese preoccupation with food, drink, and sex even as he daringly explores the nature of his country's political structure.

A lesser novelist might be satisfied with just this one narrative thread; Mo Yan, however, has bigger ambitions. In between chapters chronicling Ding Gou'er's adventures in Liquorland, the author has inserted letters and short stories purportedly sent to him by one Li Yidou, a doctoral candidate in Liquor Studies at the Brewer's College in Liquorland, and an aspiring author in his own right. The correspondence between fictional character and author allows Mo Yan to wax satirical on the subject of art, politics, and the troubling point where the two intersect in a Socialist society: "One of the tenets of the communism envisioned by Marx," the hopeful Yidou writes, "was the integration of art with the working people and of the working people with art. So when communism has been realized, everyone will be a novelist." In such a society everyone might write novels, perhaps; but as The Republic of Wine masterfully demonstrates, only a first-rate artist like Mo Yan could pull off such a subversive and darkly comic metafiction so seamlessly. --Alix Wilber

Mo Yan, winner of the 2012 Nobel Prize for Literature, was born in 1955 in North Gaomi Township in Shandong Province, an impoverished rural area that is the setting for much of his fiction. Despite the audacity of his writing, he has won virtually every national literary prize, including China’s Annual Writer’s Prize, its most prestigious award. He is the author of The Garlic Ballads, The Republic of Wine; Shifu, You’ll Do Anything for a Laugh; Big Breasts and Wide Hips, and Life and Death Are Wearing Me Out, all published by Arcade, as well as Red Sorghum and Pow!. Mo Yan and his family live in Beijing.

1. The Republic of Wine: A Novel

2. The Republic of Wine: A Novel

3. The Republic of Wine: A Novel