Items related to Some Other Place. The Right Place. (Stay More)

Harington, Donald Some Other Place. The Right Place. (Stay More)

Some Other Place. The Right Place. (Stay More) 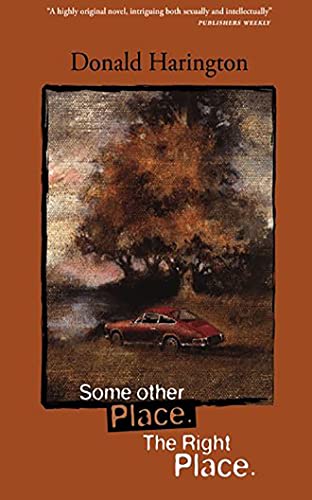 It is June. Diana Stoving's new Porsche has just broken down on the Garden State Parkway, and Diana, twenty-one, freshly graduated from Sarah Lawrence, sits in a dealer's showroom, waiting for repairs. Bored and impatient, Diana leafs through the local newspaper - and by pure chance reads the news item that will change the course of her life, that will launch her on a year's journey, a year of the strangest adventures she could ever hope to endure, suffer and enjoy. For it is this news item that leads her to meet Day Whittacker, a shy, eighteen-year-old Eagle Scout, who his high school English teacher, experimenting with 'age regression' claims is the reincarnation of a hell-raising countryman named Daniel Lyam Montross, a man who had lived a wild, romantic life and died a violent death - twenty years earlier. Together, Day and Diana disappear from New Jersey, setting out to explore the life and investigate the death of the man known as Daniel Lyam Montross. Through ghost towns and abandoned villages they journey, becoming in turn, amateur archaeologists, naturalists, sleuths, historians, and inevitably and ultimately, lovers. And always the presence of Daniel Lyam Montross is with them. Dead, he is fated to die again. Is one or both of them also fated to die? One of Harington's most devious narratives, and a precursor to the Stay More cycle.

Although he was born and raised in Little Rock, Donald Harington spent nearly all of his early summers in the Ozark mountain hamlet of Drakes Creek, his mother's hometown, where his grandparents operated the general store and post office. There, before he lost his hearing to meningitis at the age of twelve, he listened carefully to the vanishing Ozark folk language and the old tales told by story-tellers. His academic career is in art and art history and he has taught art history at a variety of colleges, including his alma mater, the University of Arkansas. His first novel was published by Random House in 1965, and since then he has published twelve other novels, most of them set in the Ozark hamlet of his own creation, Stay More, based loosely upon Drakes Creek. He has also written books about artists. He won the Robert Penn Warren Award in 2003, the Porter Prize in 1987, the Heasley Prize at Lyon College in 1998, was inducted into the Arkansas Writers' Hall of Fame in 1999 and that same year won the Arkansas Fiction Award of the Arkansas Library Association. He has been called "an undiscovered continent" (Fred Chappell) and "America's Greatest Unknown Novelist" (Entertainment Weekly).

There is much to admire here - structure, characterization, tonal and thematic complexity, evidence of hard and fruitful labor. -- The New York Times

1. Some Other Place. The Right Place. (Stay More)

2. Some Other Place. The Right Place.

3. Some Other Place. The Right Place. (Stay More)

4. SOME OTHER PLACE. THE RIGHT PLAC

5. SOME OTHER PLACE. THE RIGHT PLAC