Martin, George R R A Feast for Crows (Song of Ice and Fire)

A Feast for Crows (Song of Ice and Fire) 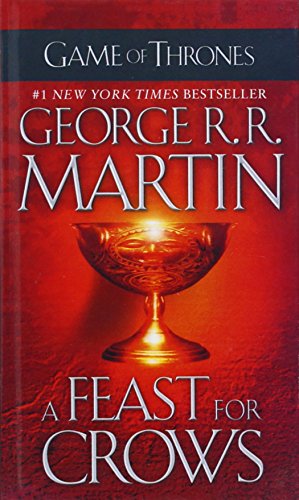 This is the long awaited fourth installment of George R R Martin's classic "A Song of Ice and Fire", continuing the most ambitious and imaginative epic fantasy since "The Lord of the Rings". "A Feast for Crows" brings to life dark magic, intrigue, and terrible bloodshed as the war-torn landscape of the Seven Kingdoms is threatened by destruction as vast as any in its violent past. The War of the Five Kings has ripped Westeros apart. The bloodthirsty, treacherous and cunning Lannisters occupy the Iron Throne, with allies as ruthless as themselves. Lord Frey was host at the Red Wedding, so called for the massacre of the guests, their screams unheard above the music of the feast. Euron Crow's Eye is as black a pirate as ever raised a sail, sworn to deliver the whole of Westeros to the ironborn. No less to be feared are their enemies. The Starks of Winterfell and the Martells of Dorne seek vengeance for their dead. And the last of the Targaryens, Daenerys Stormborn, will bring fire and blo

Few books have captivated the imagination and won the devotion and praise of readers and critics everywhere as has George R. R. Martin's monumental epic cycle of high fantasy. Now, in A Feast for Crows, Martin delivers the long-awaited fourth book of his landmark series, as a kingdom torn asunder finds itself at last on the brink of peace...only to be launched on an even more terrifying course of destruction.
A Feast for Crows
It seems too good to be true. After centuries of bitter strife and fatal treachery, the seven powers dividing the land have decimated one another into an uneasy truce. Or so it appears....With the death of the monstrous King Joffrey, Cersei is ruling as regent in King's Landing. Robb Stark's demise has broken the back of the Northern rebels, and his siblings are scattered throughout the kingdom like seeds on barren soil. Few legitimate claims to the once desperately sought Iron Throne still exist--or they are held in hands too weak or too distant to wield them effectively. The war, which raged out of control for so long, has burned itself out.
But as in the aftermath of any climactic struggle, it is not long before the survivors, outlaws, renegades, and carrion eaters start to gather, picking over the bones of the dead and fighting for the spoils of the soon-to-be dead. Now in the Seven Kingdoms, as the human crows assemble over a banquet of ashes, daring new plots and dangerous new alliances are formed, while surprising faces--some familiar, others only just appearing--are seen emerging from an ominous twilight of past struggles and chaos to take up the challenges ahead.
It is a time when the wise and the ambitious, the deceitful and the strongwill acquire the skills, the power, and the magic to survive the stark and terrible times that lie before them. It is a time for nobles and commoners, soldiers and sorcerers, assassins and sages to come together and stake their fortunes...and their lives. For at a feast for crows, many are the guests--but only a few are the survivors.

George R. R. Martin is the #1 New York Times bestselling author of many novels, including the acclaimed series A Song of Ice and Fire—A Game of Thrones, A Clash of Kings, A Storm of Swords, A Feast for Crows, and A Dance with Dragons—as well as Tuf Voyaging, Fevre Dream, The Armageddon Rag, Dying of the Light, Windhaven (with Lisa Tuttle), and Dreamsongs Volumes I and II. He is also the creator of The Lands of Ice and Fire, a collection of maps from A Song of Ice and Fire featuring original artwork from illustrator and cartographer Jonathan Roberts, and The World of Ice & Fire (with Elio M. García, Jr., and Linda Antonsson). As a writer-producer, Martin has worked on The Twilight Zone, Beauty and the Beast, and various feature films and pilots that were never made. He lives with the lovely Parris in Santa Fe, New Mexico.
From the Paperback edition.

2. A Feast for Crows (Hardback)

3. A Feast for Crows (Prebound)

Book Description Prebound. Condition: New. Prebound. Shipping may be from multiple locations in the US or from the UK, depending on stock availability. 1060 pages. 0.499. Seller Inventory # 9781613832806

4. A Feast for Crows

6. A Feast for Crows

Book Description Prebound. Condition: New. Prebound. Shipping may be from our Sydney, NSW warehouse or from our UK or US warehouse, depending on stock availability. 1060 pages. 0.499. Seller Inventory # 9781613832806