Items related to Unfathomable Depths: Drawing Wisdom for Today from... 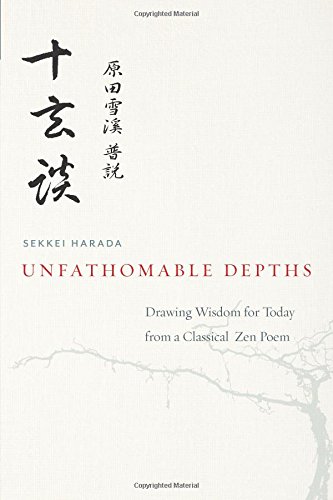 Three of the most pressing issues in any discussion of modern Zen are the true nature and function of Dharma transmission, how to appropriately practice with koans, and how to understand the "just sitting" of Soto Zen. Zen master Sekkei Harada uses the enigmatic "Ten Verses of Unfathomable Depth" as the basis of his practical and theoretical discussion of these concerns. Unfathomable Depths presents a concise treatment of Soto theory and practice, while delivering approachable and workable advice from one of Zen's most esteemed teachers. Rooting himself in Tong'an Changcha's classical poem, Harada intimately speaks to the world of Zen today.

Sekkei Harada is the abbot of Hosshinji, a Soto Zen training monastery and temple, in Fukui Prefecture, near the coast of central Japan. He was born in 1926 in Okazaki, near Nagoya, and was ordained at Hosshinji in 1951. In 1953, he went to Hamamatsu to practice under Zen Master Gien Inoue, and received inkashomei (certification of realization) in 1957. In 1974, he was installed as resident priest and abbot of Hosshinji and was formally recognized by the Soto Zen sect as a certified Zen master (shike) in 1976. Since 1982, Harada has traveled abroad frequently, teaching in such countries as Germany, France, the United States, and India. He also leads zazen groups within Japan, in Tokyo and Saitama. From 2003-2005, he was Director of the Soto Zen Buddhism Europe Office located in Milan.

Daigaku Rumme was born in 1950 in Mason, City Iowa, USA. In 1976, he entered Hosshinji as a layman and was ordained by Harada Roshi in 1978. He lived and practiced at Hosshinji until 2003. On several occasions he accompanied Harada on his visits to Europe, India, and the United States, as his interpreter. Since 2003, Rumme has been on the staff of the Soto Zen Buddhism International Center located in San Francisco.

"A celebration is called for now that this important poem and Zen Master Harada Sekkei’s commentary has arrived in English. This volume will serve as a guide for Zen students for many generations to come." Author: Setsuan Gaelyn Godwin, Abbot, Houston Zen Center

Shipping: US$ 36.50
From United Kingdom to U.S.A.
Destination, rates & speeds