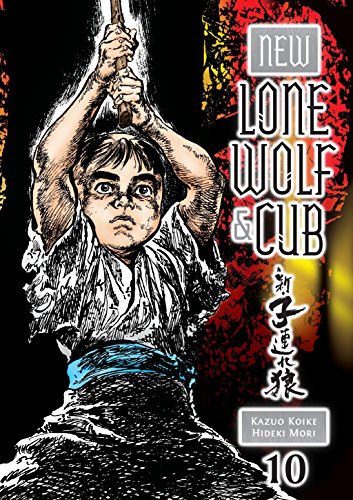 Tōgō Shigekata and Daigoro have battled to the gates of Edo, but now must plunge into the rugged mountains east of the capital to find the eccentric hermit swordsmith whose black-steel blades can shatter a dotanuki battle sword. That is, if Mamiya Rinzo's mountain warriors don't reach him first!

Kazuo Koike's Lone Wolf and Cub is an acclaimed masterpiece of graphic fiction, and New Lone Wolf and Cub is the long-awaited sequel to this groundbreaking manga. Illustrated by Hideki Mori and translated by Dana Lewis.
"The storylines are still intense, the characters well developed, and the art memorable." -ReviewFix.com

Kazuo Koike is a prolific Japanese manga writer, novelist and entrepreneur. Early in Koike's career, he studied under Golgo 13 creator Takao Saito and served as a writer on the series. Koike, along with artist Goseki Kojima, made the manga Kozure Okami (Lone Wolf and Cub), and Koike also contributed to the scripts for the 1970s film adaptations of the series, which starred famous Japanese actor Tomisaburo Wakayama. Koike and Kojima became known as the "Golden Duo" because of the success of Lone Wolf and Cub. Another series written by Koike, Crying Freeman, which was illustrated by Ryoichi Ikegami, was adapted into a 1995 live-action film by French director Christophe Gans.