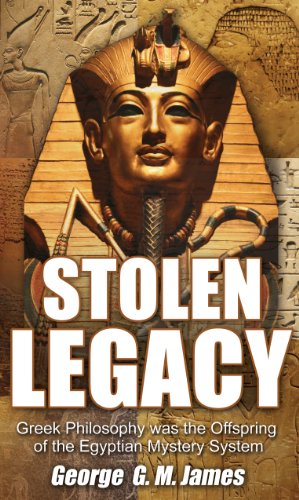 George James was a professor at a small black college in Arkansas during the 1950s when he wrote this book. Originally from Guyana, he was an intellectual who studied African and European classics. He soon realized something was wrong with the way the history of philosophy had been documented by Western scholars. Their biggest mistake, according to James, was they had assumed philosophy had started with the Greeks. James had found that philosophy was almost entirely from ancient Egypt and that the records of this had not only been distorted but, in many cases, deliberately falsified. His conclusion was that there was no such thing as Greek philosophy because it was stolen from the Egyptians. As a result, this was one of the first books to be banned from colleges and universities throughout North America. Although opponents have eventually found some flaws, it remains a groundbreaking book to this day. Even the famous Greek historian from the 5th century, Herodotus, admitted that the Greeks had borrowed many important ideas and concepts from the Egyptians. These ideas covered not just philosophy, but also medicine, architecture, politics and more. The purpose of this book is to restore the truth about African contributions to higher thought and culture.

The book is an attempt to show that the true authors of Greek philosophy were not the Greeks, but the people of North Africa, commonly called the Egyptians; and the praise and honor falsely given to the Greeks for centuries belong to the people of North Africa, and therefore to the African Continent. Consequently, this theft of the African legacy by the Greeks led to the erroneous world opinion that the African Continent has made no contribution to civilization, and that its people are naturally backward. This is the misrepresentation that has become the basis of race prejudice, which has affected all people of color.

Professor George G. M. James was born in Guyana, South America and he earned several degrees from Durham University in England. James also earned certificates in the United States to teach mathematics, Latin, and Greek. He later served as a Professor in the areas of logic, Greek, language studies, philosophy, mathematics, and social sciences including his last five years at the University of Arkansas at Pine Bluff. In 1954, he published the groundbreaking work, Stolen Legacy, which challenged the idea of the “immaculate conception” of Greek philosophy.

Stolen Legacy: Greek Philosophy Was the Offspring of the Egyptian Mystery System (Paperback or Softback)

Shipping: US$ 4.28
From United Kingdom to U.S.A.
Destination, rates & speeds