Items related to Throne of Glass 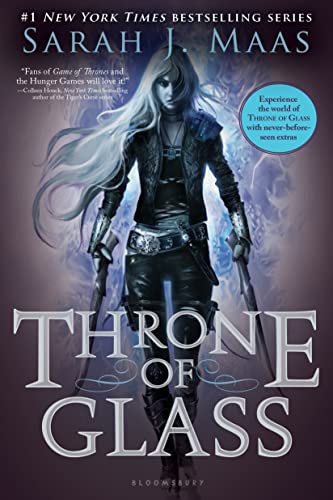 In a land without magic, where the king rules with an iron hand, an assassin is summoned to the castle. She comes not to kill the king, but to win her freedom. If she defeats twenty-three killers, thieves, and warriors in a competition, she is released from prison to serve as the king's champion. Her name is Celaena Sardothien.

The Crown Prince will provoke her. The Captain of the Guard will protect her. But something evil dwells in the castle of glass--and it's there to kill. When her competitors start dying one by one, Celaena's fight for freedom becomes a fight for survival, and a desperate quest to root out the evil before it destroys her world.

Amazon Best Teen Book of the Month, August 2012: Adarlan’s Assassin was the most feared killer in the world--until she was captured and sent to a prison labor camp to rot. But when the Prince needs a skilled fighter to battle in the royal court and become the King’s Champion, he pulls the assassin out of prison only to find she is a blonde 18-year-old girl. Celaena is as beautiful as she is deadly and she jumps at the chance to earn her freedom. Her mission seems straightforward: be the last (wo)man standing at the end of the competition. What she doesn’t expect is to develop feelings for the two men protecting her and to make an unlikely ally in a princess. Sarah J. Maas’ debut is stunning from beginning to end. Throne of Glass stands-out because of its memorable setting (there is actually a castle made of glass), strong characters, and continuous heart-stopping action sequences. Celaena is a heroine as memorable for her fighting abilities as she is for her quick wit and large heart and I can’t wait to see her grow and change throughout this exciting new series. --Caley Anderson

SARAH J. MAAS is the New York Times bestselling author of the Throne of Glass series: Throne of Glass, Crown of Midnight, and Heir of Fire, and the series' prequel, The Assassin's Blade. A New York native, Sarah currently lives in Pennsylvania with her husband and dog.
Visit her online at sarahjmaas.com
Facebook: facebook.com/throneofglass
Twitter: @SJMaas

Throne of Glass (Paperback or Softback)