Items related to The Mirror of Magic: A History of Magic in the Western...

Seligmann, Kurt The Mirror of Magic: A History of Magic in the Western World

The Mirror of Magic: A History of Magic in the Western World 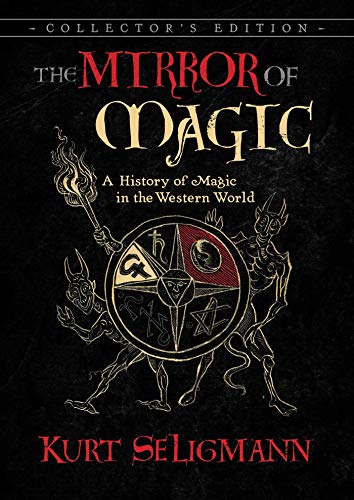 A collector’s edition of the classic, illustrated, and comprehensive history of magic and the occult

· Includes all 250 illustrations from the original 1948 edition

In the occult classic The Mirror of Magic, renowned Surrealist Kurt Seligmann (1900-1962) draws from his encyclopedic practitioner’s knowledge and extensive antiquarian collection to offer a comprehensive, illustrated history of magic and the occult from Mesopotamia and ancient Egypt through the 18th century. He explores the gods and divinatory arts of the legendary Sumerians and the star-wise Babylonians, including the birth of astrology. He examines the afterlife beliefs of the ancient Egyptians and the dream interpretation practices and oracles of ancient Greece, including the mysteries of Eleusis and the magical philosophy of Plato, Socrates, and other Greeks. He uncovers the origins of Gnosticism and the suppression and banishment of magic by the post-pagan, Christian emperors of Rome.

Seligmann reviews the principles of alchemy, sharing famous transmutations and allegorical illustrations of the alchemical process and explores the Hermetica and its remarkable adepts. Investigating the Middle Ages, the author discusses the work of European magicians of the time, including Albertus Magnus, Roger Bacon, Agrippa, Nostradamus, and Pico Della Mirandola. He studies the medieval practices of devil worship, witchcraft, and black magic, as well as the “Cabala” in both its Hebrew and Christian forms. He also examines the art of the Tarot and many lesser known divination techniques. He explores the development of secret societies, including Freemasonry and Rosicrucianism, in the 17th century and the increase in occult publications and magical science in the 18th century.

First published in 1948, this history of magic and the occult seeks to “mirror” the magical worldview throughout the ages. Beautifully illustrated with images from the author’s rare library, this collector’s edition features all of the artwork--more than 250 images--from the original 1948 edition.

Kurt Seligmann (1900-1962) was a Swiss-American Surrealist painter and expert on magic, known for his extensive collection of rare books and his monumental role in the popularization of Surrealism in the United States. After the outbreak of World War II in 1939, he was the first European Surrealist to arrive in New York. After the war his work was exhibited widely and acquired by museums throughout the United States and Europe. He taught for many years at various colleges in New York City.

There is evidence that the art which was later called alchemy came to the West at the beginning of the second century of the Christian Era. The most important testimony substantiating this is that of Pliny the Elder (A.D. 23-79) who writes extensively on metallurgy but does not mention ideas which could be included among those related to alchemy. The various beliefs concerning metals and their treatment mentioned by Pliny indicate that alchemy was in his time ready to emerge.

Despite the alchemists’ claim concerning the age of their art, it is in point of fact the youngest magical wisdom. The notion that it flourished during the time of the Pharaohs has been abandoned along with the etymology chem or qem, meaning black, an Egyptian word employed occasionally to describe Egypt, whose black soil contrasted so sharply with the red earth of the desert.

It was in the fourth century, amidst the merciless fight which Christianity was waging against paganism, that alchemy flowered. Zosimus of Panopolis, a writer of that epoch, appointed himself the apologist of the alchemical art. His allegories and comments are cited by mediaeval experts as the most profound and venerable documents of the arcana.

Zosimus declared that the knowledge of metals, precious stones, and scents dated back to the epoch mentioned furtively in the Genesis: “The sons of God saw the daughters of men, that they were fair.” The mysterious sons of God were believed to be fallen angels who had mated with the women of antediluvian times.

In gratitude, the angels taught these women various arts, obviously with the intention that their companions make jewels, colorful garments, and perfumes with which to adorn their beauty. Thus, the wise men of ancient times decided that the fallen angels must have been evil, perverters of morals and manners.

Tertullian (ca. A.D. 160-240) confirms these early beliefs, saying that the sons of God bequeathed their wisdom to the mortals with the evil intention of seducing them to “mundane pleasures.”

According to Zosimus, these happenings marked the beginning of alchemy. He was repeating what late Jewish and early Christian writers had already declared. Zosimus elaborates upon the subject and gives also the name of a very early master of the alchemical art, the mysterious Chemes, though this legendary ancestor of the gold-makers has left no evidence that he ever existed. However, it was accepted that Chemes had written a book which he called Chema, and that the fallen angels had given lessons to the daughters of men with the aid of this book. From Chemes and Chema was derived Chemia, a name which was given consequently to the art itself.

The Greek word Chemia was the designation for alchemy until the Arabs added to it the article ‘al’ of their native tongue.

In an early alchemical manuscript, a priestess who calls herself Isis and who addresses her writings to her son Horus declares that she owed her knowledge to the first of the angels and prophets: Amnael. Isis does not hesitate to tell us that she acquired her wisdom as a reward for intercourse with Amnael. Her book is of great interest to the student of alchemical tradition, and still more revealing are the writings of a woman known by the pseudonym of Mary the Jewess. Mary, a Greek, is apparently the earliest alchemist of the West. None of her writings have survived in complete form, but she is cited by her colleagues, like Zosimus, as if she might be identified with Moses’ sister Miriam. She is a most capable chemist, and the invention of a series of new technical devices is ascribed to her: the vessel enclosed in a box of hot ashes, producing a low and steady heat; the dung bed which retains its warmth for an indefinite time; the double boiler, still called in French bain-marie.

Speaking of women alchemists, we must not forget the early scholar who called herself Cleopatra; and Theosebia, Zosimus’ sister. The participation of so many women in the study of the newly invented art is like a confirmation of the fable that wills the fair sex to be connected with the origins of alchemy.

The literature provides a clear picture of the early alchemical art. By these authentic writings it is possible to unwind the silky thread which fable has spun into a marvelous cocoon, and to unravel its mystery.

Together with magic and other illicit arts, alchemy was revealed to mankind by the cursed angels, betrayers of God’s secrets. They had been punished for this indiscretion; a curse lay upon the forbidden knowledge which enabled man to rival his creator. Investigation of the hidden works of nature was sacrilegious. St. Augustine shares this conception when he censures “the vain and curious desire of investigation, known as knowledge and science.”

The rivalry between knowledge and faith had likewise been perceived by Roman writers. In his book On the Nature of Things, Lucretius (ca. 98-53 B.C.) exclaims triumphantly: “Thus is religion trod down, by a just reverse; victory makes us akin to the gods.” He adds, hypocritically: “Do not think that I wish to teach you the principles of impiety, or to lead you to the path of crime.”

Throughout the first centuries of our era, the tree of knowledge of the Genesis remained the symbol of such sinful investigation. With the eating of the forbidden fruit, man had become like God, knowing good and evil. No doubt the alchemists accepted such views, yet they proceeded with their investigations just the same. Isis’ boast sounds like a challenge to the passage of Genesis. Gnostic teachings created this entirely new attitude, for many Gnostic sects were indifferent to the problem of good and evil. The Ophites worshipped the serpent of the bible as a beneficent being, since it had rightly directed man to knowledge. The tree of knowledge and the serpent were thus to become the most cherished emblems of alchemy.

1. The Mirror of Magic: A History of Magic in the Western World

2. The Mirror of Magic: A History of Magic in the Western World

3. The Mirror of Magic: A History of Magic in the Western World (Hardback or Cased Book)

4. The Mirror of Magic: A History of Magic in the Western World

5. The Mirror of Magic: A History of Magic in the Western World

6. The Mirror of Magic: A History of Magic in the Western World

7. The Mirror of Magic: A History of Magic in the Western World

8. The Mirror of Magic: A History of Magic in the Western World

9. The Mirror of Magic: A History of Magic in the Western World

10. The Mirror of Magic: A History of Magic in the Western World