Items related to Lexicon of the Mouth: Poetics and Politics of Voice...

LaBelle, Brandon Lexicon of the Mouth: Poetics and Politics of Voice and the Oral Imaginary

Lexicon of the Mouth: Poetics and Politics of Voice and the Oral Imaginary 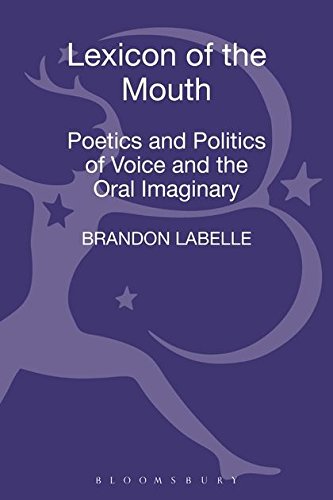 Lexicon of the Mouth surveys the oral cavity as the central channel by which self and surrounding are brought into relation. Questions of embodiment and agency, attachment and loss, incorporation and hunger, locution and the non-sensical are critically examined. In doing so, LaBelle emphasizes the mouth as a vital conduit for negotiating "the foundational narrative of proper speech." Lexicon of the Mouth aims for a viscous, poetic and resonant discourse of subjectivity, detailed through the "micro-oralities" of laughing and whispering, stuttering and reciting, eating and kissing, among others. The oral cavity is posed as an impressionable arena, susceptible to all types of material input, contamination and intervention, while also enabling powerful forms of resistance, attachment and conversation, as well as radical imagination.

Lexicon of the Mouth argues for the revolutionary promise of the laugh, the spirited mythologies of the whisper, the schizophonics of self-talk, and the primal noise of gibberish, suggesting that the significance of voicing is fundamentally bound to the exertions of the mouth. Subsequently, assumptions around voice and vocality are unsettled in favor of an epistemology of the oral, highlighting the acts of the tongue, the lips and the throat as primary mediations between interior and exterior, social structures and embodied expressions. LaBelle makes a significant contribution to currents in sound and voice studies by reminding that to hear the voice, and to consider a politics of speech, is first and foremost to assume the mouth.

Brandon LaBelle is an artist and writer working with sound culture, voice, and situated identity. His previous books, Background Noise: Perspectives on Sound Art (2006) and Acoustic Territories: Sound Culture and Everyday Life (2010) are also published by Bloomsbury. He is the editor of Errant Bodies Press and Professor at the Bergen Academy of Art and Design, Norway.

“An artist and a sound culture theorist, LaBelle offers a wide-ranging epistemology of oral gestures, arguing for the mouth as a contested space in which the politics and psychology of speech and the body are embodied. In a dozen chapters, he explores the oral cavity (and some associated physiology), illustrates its verbal and nonverbal productions, and connects them to topics in cultural theory such as decolonization and transgression ...The exemplification favors critical theory (Butler, Kristeva, Lacan, Cixous, Freud) and performance art, and the book will be of special interest to art historians, cultural theorists, and performers. There are also many intriguing observations about such topics as ear and neck biting, kissing protests, and hysterical laughter... Summing Up: Optional. Upper-division undergraduates and above.” ―E. L. Battistella, Southern Oregon University, CHOICE

“LaBelle's main focus on artistic evidence and the radical empiricism inherent in aesthetic research is truly a radical move. ... He takes the artistic experience, in a very specific extremist and often erratic situation, as an empirical basis that allows an interpretation that refers to historical, cultural and scientific approaches to vocal performativity. By this strategy of research the author provides a truly convincing example for artistic research - the best possible.” ―Holger Schulze, Seismograf

“When I taught my first sound studies survey in 2005, the number of booksavailable was quite small and the field felt, for lack of a better word, largely'knowable.' In the decade since, a stunning range of new offerings from a variety of publishers has become readily available, and sound studies is a far more expansive discipline. This fact is nowhere more evident than in Bloomsbury Academic's excellent sound studies catalog ... the scholarship here shows how adept the cultural study of sound can be at unearthing the thorny political and social tensions that define contemporary culture.” ―Nicholas C. Laudadio, University of North Carolina Wilmington, Journal of Popular Music Studies

"LaBelle shows how the mouth envelops and develops bodies, languages and subjectivities. He constructs what he calls the ‘oral imaginary’, the forms of figuration and function that define the role of the mouth as a cultural artefact ... the many choreographies of the mouth that he presents and the many ways in which those choreographies envelop and inflect voice, culture and politics leaves us in a dizzying, vertiginous space of possibility and potentiality.” –John Melillo, Journal of Interdisciplinary Voice Studies

1. Lexicon of the Mouth: Poetics and Politics of Voice and the Oral Imaginary