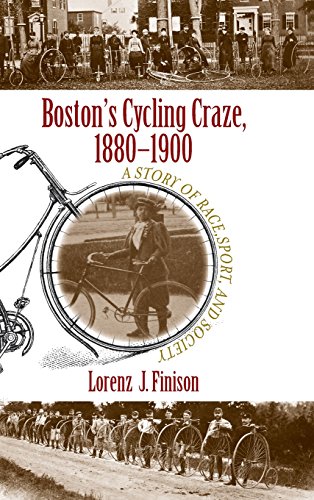 From 1877 to 1896, the popularity of bicycles increased exponentially, and Boston was in on it from the start. The Boston Bicycle Club was the first in the nation, and the city's cyclists formed the nucleus of a new national organization, the League of American Wheelmen. The sport was becoming a craze, and Massachusetts had the largest per capita membership in the league in the 1890s and the largest percentage of women members. Several prominent cycling magazines were published in Boston, making cycling a topic of press coverage and a growing cultural influence as well as a form of recreation.

Lorenz J. Finison explores the remarkable rise of Boston cycling through the lives of several participants, including Kittie Knox, a biracial twenty-year-old seamstress who challenged the color line; Mary Sargent Hopkins, a self-proclaimed expert on women's cycling and publisher of The Wheelwoman; and Abbot Bassett, a longtime secretary of the League of American Wheelman and a vocal cycling advocate for forty years. Finison shows how these riders and others interacted on the road and in their cycling clubhouses, often constrained by issues of race, class, religion, and gender. He reveals the challenges facing these riders, whether cycling for recreation or racing, in a time of segregation, increased immigration, and debates about the rights of women.

Lorenz J. Finison is a founding member of Cycling Through History and principal of the public health consulting firm SigmaWorks.

"Finison introduces us to a number of interesting characters who were in some way involved in the struggle for greater opportunity and acceptance. This is an important contribution to the literature on race relations and cycling history."―David Herlihy, author of Bicycle: The History

"Finison demonstrates that cycling was not immune to the popular prejudices of the day. Not only is this an informative history, but a compelling morality tale that meditates on the important intersection of sport, race, and gender in the broader spectrum of American culture."―Thomas Whalen, author of Dynasty's End: Bill Russell and the 1968–1969 World Champion Boston Celtics

"Finison is reporting here on so many interesting aspects of the local bicycle boom years in Boston. I learned a great deal from this work, particularly about the end of those book years. In addition, Finison presents the racial relationships fairly, whether painful or uplifting. This is a superb book."―David Gordon Wilson, author of Bicycling Science

"Finison chronicles the early debates associated with wheeling, which included issues of race, gender, and class. . . . References to contemporary Boston locations may be of interest to local historians. Recommended."―Choice

Book Description University of Massachusetts Press. Hardcover. Condition: As New. An apparently unread copy in perfect condition. Dust cover is intact; pages are clean and are not marred by notes or folds of any kind. At ThriftBooks, our motto is: Read More, Spend Less. Seller Inventory # G1625340737I2N00

Book Description University of Massachusetts Press, 2014. Condition: Good. A+ Customer service! Satisfaction Guaranteed! Book is in Used-Good condition. Pages and cover are clean and intact. Used items may not include supplementary materials such as CDs or access codes. May show signs of minor shelf wear and contain limited notes and highlighting. Seller Inventory # 1625340737-2-4