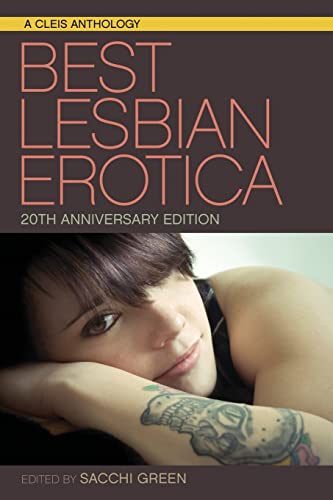 Cleis Press' most lauded editor, Sacchi Green assumes the helm of one the most-heralded and best-selling series, Best Lesbian Erotica. This match made in book publishing heaven is also a fan fave whose readers range from 18 to 80 and who can't get enough of the Lambda Award-winning Sacchi Green's scorching hot stories of lesbian sex. From lust-at-first sight quickies to long-time companions, this voracious volume is the stuff of every woman's fantasy. With secret desires, coming-out, and coming-of-age stories and deeper explorations of what Green describes as "the fiercer shores of sex," Best Lesbian Erotica of the Year 20th Anniversary Edition aims to please and leave you satisfied.

We aim to please and leave you satisfied!

The 20th Anniversary edition of Best Lesbian Erotica takes the tradition of well-written, steamy, sensual, savvy excellence and runs with it, moving, as always, with the times.

Secret desires, coming-out and coming of age stories and deeper explorations are here with vividly drawn settings, fully developed characters, story lines that grip you, and hot, intense sex between women you ache to fuck, or to be—or maybe just like the ones in your own bed. From stories that pierce the heart as deeply as the body, to edgy scenarios crossing boundary after boundary, to works so original they defy description, double-Lambda-Award-winning editor Sacchi Green gathers the best from writers who push all your buttons and writers who show you new buttons you never knew you had. Happy Anniversary, BLE!

Sacchi Green is an author and the editor of many award-winning books and anthologies. Her stories have appeared in an array of erotica publications, including the Best Lesbian Erotica series.

Sacchi Green is the editor of Girl Crazy and has co-edited the anthologies Lesbian Cowboys, Rode Hard, Put Away Wet; Hard Road, Easy Riding; and Lipstick on Her Collar. Her stories have appeared in an array of erotica publications, including the Best Lesbian Erotica series, the Best Women's Erotica series, The Mammoth Book of Best New Erotica, and Best Lesbian Romance 2010. She lives in Pioneer Valley, MA.