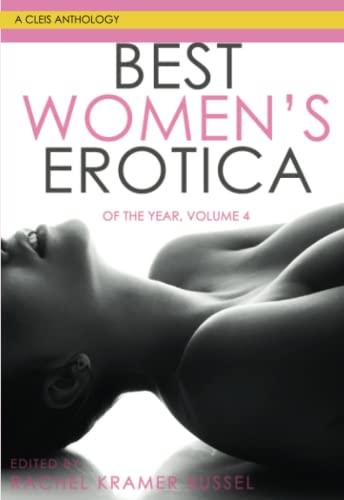 In Best Women's Erotica of the Year, Volume 4, award-winning editor Rachel Kramer Bussel has gathered the hottest sexy stories starring outspoken women who daringly pursue love and lust.
You'll read about a single mom who goes back to college and gets some very hands-on education from her hot professor, an Amish woman tenderly revealing her most intimate desires, and a woman who crafts the man of her dreams. From outsiders who passionately claim their place without apology to women taking the boldest of risks with their hearts and their bodies, these sizzling stories are sure to make your heart pound.
Featuring stories by popular authors including Alyssa Cole, Megan Hart, Tamsen Parker, Sofia Quintero, Suleikha Snyder, and Alessandra Torre, along with a variety newcomers to the genre, these tales will turn you on and stay with you long after you've finished.

Introduction: The Sexual Allure of Outsiders Who Take Risks

The first three volumes of Best Women's Erotica of the Year didn't have official themes, but when I was compiling Volume 4, I decided I wanted stories on the themes of Outsiders and Risk. While on the surface those may seem incongruous, both spoke to me regarding current events and seemed urgently relevant. At a time when outsiders of many kinds are being ostracized, discriminated against, and shunned, I wanted to explore what being an outsider feels like on a deeply personal level. I always want the authors I publish to turn readers on, but this time, I also want to make you think.

The outsiders you'll read about here sometimes grapple with navigating a new culture, as in "Aftershock," by Jo Henny Wolf, or the constraints of their own culture, such as the tender, heartbreaking longing in "Seven Sweets and Seven Sours," by Megan Hart. In Eliza David's "Protest of Passion," a community organizer finds herself swept away by a different kind of passion than the one motivating her lover.

I left it to my authors to define what exactly an outsider means to them and their characters. All of us have likely been outsiders at one time or another, depending on the circumstances. Outsiders may be able to learn something about themselves via insiders, and in the process enjoy some hot sex, as happens in "The Pick-Me-Up," by Suleikha Snyder. Sometimes it's hard to say who the outsider is, such as in Alyssa Cole's sexy science fiction tale, "Essential Qualities." The bisexual protagonist of Calliope Bloom's "O Captain! My Captain!" ventures into unknown territory with her new lovers, going from outsider to insider as she takes a risk that pays off.

Sometimes these risks, while sexual in nature, involve confronting aspects of these characters' core selves that require a great amount of bravery. In "Her Invisible Prison," by Jocelyn Dex, Eden faces a battle between her desire and her agoraphobia. Her steps out of that "prison" are hard fought and all the more exciting. And lest you think a story involving mental health can't be scorching hot, Dex will surely prove you wrong. Similarly, in "Baby Doll," by Sienna Saint-Cyr, Heather pursues her fetish only with the very careful reassurance of her lover.

You can find out more about the series at bweoftheyear.com and follow our books and authors @BWEoftheyear on Twitter and bestwomenserotica on Instagram. You can always reach me at bweoftheyear@gmail.com to share what you want to see more of in future volumes.

I hope, at least in some small way, this book entertains you and gives you inspiration to take the kinds of risks these characters do.

Rachel Kramer Bussel (rachelkramerbussel.com) is a writer, editor, event organizer and erotica writing instructor. She's edited over 60 anthologies, including The Big Book of Orgasms, Come Again: Sex Toy Erotica, Dirty Dates, On Fire, Spanked, Please, Sir, Please, Ma'am, and is Best Women's Erotica of the Year series editor. Her nonfiction has been published in The New York Times, The Washington Post, Marie Claire, O, The Oprah Magazine, Elle.com, Salon, Slate, Time.com, The Village Voice and numerous other publications. Follow her @raquelita on Twitter and learn more about her writing workshops and consulting at EroticaWriting101.com.