Items related to The Oracle: The Jubilean Mysteries Unveiled 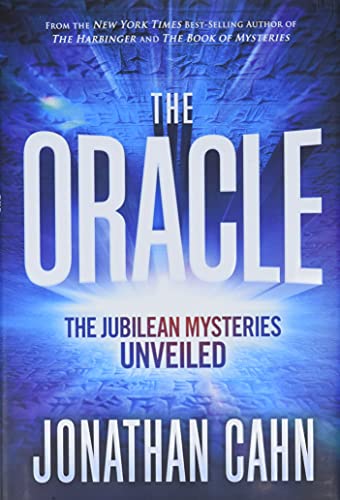 Discover the amazing secret of the ages...and the mystery of your life!

The Oracle will reveal the mystery behind everything...the past, the present, current events, even what is yet to come! Open the seven doors of revelation—and prepare to be blown away!

Jonathan Cahn, author of the New York Times best sellers The Harbinger, The Mystery of the Shemitah, The Book of Mysteries, and The Paradigm, now unveils The Oracle, in which he opens up the Jubilean mysteries and a revelation so big that it lies behind everything from the rise and fall of nations and empires (even America), to the current events of our day, to the future, to end-time prophecy, and much more.

Jonathan Cahn takes the reader on a journey to find the man called the Oracle. One by one each of the Jubilean mysteries will be revealed through the giving of a vision. The Oracle will uncover the mysteries of The Stranger, The Lost City, The Man With the Measuring Line, The Land of Seven Wells, The Birds, The Number of the End, The Man in the Black Robe, The Prophet's Song, The Matrix of Years, The Day of the Lions, The Awakening of the Dragon, and much more.

The reader will discover the ancient scrolls that contain the appointed words that have determined the course of world history from the onset of modern times up to our day. The revelation is so big that it will involve and open up the mysteries of everything and everyone from Mark Twain to Moses, from King Nebuchadnezzar to Donald Trump, from the fall of empires to the rise of America, from a mystery hidden in a desert cave to another in an ancient scroll, from the palace of the Persian Empire to the US Senate, from the Summer of Love to the Code of Babylon, and much, much more.

Ultimately the Oracle will reveal the secret that lies behind end-time prophecy and the mystery of the end of the age.

As with The Harbinger and The Book of Mysteries, Cahn reveals the mysteries through a narrative. A traveler is given seven keys; each will open up one of seven doors. Behind each door lies a stream of mysteries. The reader will be taken on a journey of angels and prophetic revelations waiting to be discovered behind each of the seven doors-the ancient secrets that lie behind the world-changing events of modern times-and revelations of what is yet to come.

Hailed as a mind-blowing masterpiece, The Oracle will reveal mysteries that are absolutely real, amazing, stunning, mind-blowing, and life-changing.

Prepare to be blown away.

Jonathan Cahn caused a worldwide stir with the release of his explosive first book, The Harbinger, which became an instant New York Times best seller and brought him to national and international prominence. His next three books were also New York Times best sellers, The Mystery of the Shemitah, The Book of Mysteries, and The Paradigm. He was named, along with Billy Graham and Keith Greene, one of the top forty spiritual leaders of the last forty years to have radically impacted the world. Called the prophetic voice of this generation, Cahn is a much-sought-after speaker and has been highlighted in the New York Times as well as in many national and international media. He has spoken on Capitol Hill, at the United Nations, and to millions of people around the world. Cahn is known for opening the deep mysteries of Scripture and bringing forth messages of prophetic import. He leads Hope of the World ministry, an international outreach of teaching, evangelism, and compassion projects for the world's most needy. He also leads the Jerusalem Center/Beth Israel, a worship center made up of Jews and Gentiles, people of all backgrounds, just outside New York City, in Wayne, New Jersey.

Chapter 1
THE MYSTERY
What if I told you of a mystery so vast that it spans the world and the ages, from ancient times to this very moment . . . a mystery that moves behind and through all human events, directs and turns the paths of leaders, determines the future of nations and empires . . . and of the world itself . . . to bring all things to their appointed end?”
“I wouldn’t believe it.”
“No,” he replied, “I wouldn’t have either if I hadn’t seen it with my own eyes.”
“What do you mean, ‘seen it with your own eyes’? And what mystery?”
“One made up of many others . . . a mystery of mysteries.”
“OK. What mysteries then?”
“The Jubilean mysteries,” he replied.
“I’ve never heard of them.”
“Their origins are ancient. They were birthed in a desert not unlike this one and on a mountaintop not unlike the one on which we sit . . . thousands of years ago.”
“And yet they’re determining what’s happening now?”
“Yes.”
“How could something from ancient times be doing that?”
“That,” he said, “is the mystery.”
They were silent for a time as a warm desert wind swept across the mountaintop. The traveler laid down his backpack on the ground by the rock on which he was sitting. His boots were covered with sand, his jeans were torn, and he was tired from the journey. But what he was hearing made him forget his weariness. He had set out in search of answers. The one he had come to see, the man on the mountaintop, didn’t look as he had imagined he would have. He appeared to be in his early thirties, not much older than the traveler himself, and was without a beard, clean-shaven, ordinary looking. But there was something about him. He spoke with an authority and a sincerity that gave the traveler confidence that his journey may not have been in vain. And yet he was still as puzzled by the man as he was intrigued.
“I don’t see how something like that could exist,” he said. “But nevertheless the mysteries have determined the course of empires and superpowers, kings and presidents . . . ”“Do you mean ancient principles or guiding truths that still have meaning for the modern world?”“Such things do exist,” he replied, “but no. I’m speaking of something much different and much more specific . . . ancient mysteries that have determined the events of our world so precisely that they tell us not only what must take place . . . but when.” “But in ancient times they didn’t number the years as we do now.”
“There are other ways by which the appointed times are marked.”
“It doesn’t seem possible.”
“And yet it is.
“I just don’t see how something so ancient could reveal . . . ”
“More than that,” he replied, “they contain ancient words and messages appointed to be spoken at specific times, even on the specific days on which the events of which they speak are to take place.”
“It sounds so . . . ,” he paused, looking for the right word, which never came.
“And the mystery of the end.”
“The end?”
“The end that was foretold.”
“This is so unlike anything I’ve ever heard.”
“Then you’ve never heard of prophecy?”
“Is this something that requires faith . . . like faith in God?”
“It requires nothing,” he said. “It exists whether you believe or not. Your belief doesn’t make it any more real, and your doubt doesn’t make it any less so. If you’re ever going to find that which you don’t already have, then you have to be open to what you’ve never known . . . or believed could exist. . . . And I should be the last person telling you this.”
“Why is that?”
“I wasn’t a believer. I was a skeptic. I didn’t believe there was any purpose to life . . . any significance, any meaning. I saw everything as a series of random events, chance occurrences, accidents . . . sorrows with no purpose, joys with no meaning. Everything was meaningless. So I’m the last person to be telling you about the fingerprints of God.”
“The fingerprints of God?”
“The signs, the markers, the witnesses in this world of the purpose behind everything . . . that it’s not an accident.”
“That what isn’t an accident?”
“History, life, existence . . . that there’s a reason, a purpose, and a plan. The mystery reveals the threads of the master loom.”
“You were a skeptic,” he said. “So what happened? What changed you? And how did you end up here, in the middle of . . . ?”
“I came as you did in search of answers and in search of one.”
“In search of one what?”
“In search of one who.”
“Then who?”
It was only after a long pause that the answer came.
“The Oracle.”

The Oracle: The Jubilean Mysteries Unveiled (Hardback or Cased Book)

Shipping: US$ 4.92
From United Kingdom to U.S.A.
Destination, rates & speeds