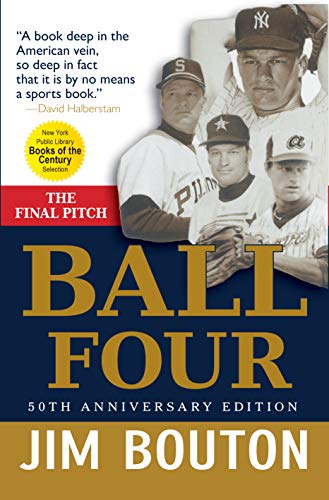 The beloved baseball classic now available in paperback, with an updated epilogue by Jim Bouton

When Ball Four was first published in 1970, it hit the sports world like a lightning bolt. Commissioners, executives, and players were shocked. Sportswriters called author Jim Bouton a traitor and ""social leper."" Commissioner Bowie Kuhn tried to force him to declare the book untrue. Fans, however, loved the book. And serious critics called it an important social document. Following his death, Bouton’s landmark book has remained popular and his legacy lives on through its many readers, including those who don't ordinarily follow baseball.

For the updated edition of this historic book, Bouton wrote a new epilogue, detailing his perspective on how baseball has changed since the last edition was released.

As a player, former hurler Jim Bouton did nothing half-way; he threw so hard he'd lose his cap on almost every pitch. In the early '70s, he tossed off one of the funniest, most revealing, insider's takes on baseball life in Ball Four, his diary of the season he tried to pitch his way back from oblivion on the strength of a knuckler. The real curve, though, is Bouton's honesty. He carves humans out of heroes, and shines a light into the game's corners. A quarter century later, Bouton's unique baseball voice can still bring the heat.

For the new edition of this historic book, Jim Bouton has written a highly entertaining epilogue, reflecting upon his life at the age of 60, the traumatic death of his daughter, and the heartwarming invitation from the Yankees to play in his first Old-Timers’ Day game since his exile from the club. Says the author about his ground-breaking book, "By establishing new boundaries, Ball Four changed sports reporting at least to the extent that, after the book, it was no longer possible to sell the milk and cookies image again. Besides, you can get sick on milk and cookies." Ball Four is a high-and-inside fastball that will forever be a journalistic classic.