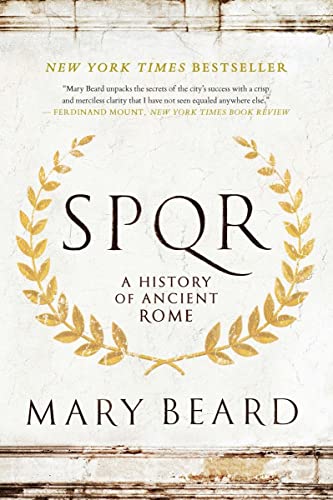 A sweeping, "magisterial" history of the Roman Empire from one of our foremost classicists shows why Rome remains "relevant to people many centuries later" (Atlantic).

In SPQR, an instant classic, Mary Beard narrates the history of Rome "with passion and without technical jargon" and demonstrates how "a slightly shabby Iron Age village" rose to become the "undisputed hegemon of the Mediterranean" (Wall Street Journal). Hailed by critics as animating "the grand sweep and the intimate details that bring the distant past vividly to life" (Economist) in a way that makes "your hair stand on end" (Christian Science Monitor) and spanning nearly a thousand years of history, this "highly informative, highly readable" (Dallas Morning News) work examines not just how we think of ancient Rome but challenges the comfortable historical perspectives that have existed for centuries. With its nuanced attention to class, democratic struggles, and the lives of entire groups of people omitted from the historical narrative for centuries, SPQR will to shape our view of Roman history for decades to come.

“Beard tells this story precisely and clearly, with passion and without technical jargon...SPQR is a grim success story, but one told with wonderful flair.”
- Greg Woolf, Wall Street Journal

“Though she here claims that 50 years of training and study have led up to SPQR, Beard wears her learning lightly. As she takes us through the brothels, bars, and back alleys where the populus Romanus left their imprint, one senses, above all, that she is having fun.”
- James Romm, New Republic

“By the time Beard has finished, she has explored not only archaic, republican, and imperial Rome, but the eastern and western provinces over which it eventually won control...She moves with ease and mastery though archaeology, numismatics, and philology, as well as a mass of written documents on stone and papyrus.”
- G. W. Bowersock, New York Review of Books

“In SPQR, her wonderful concise history, Mary Beard unpacks the secrets of the city's success with a crisp and merciless clarity that I have not seen equaled anywhere else.”
- Ferdinand Mount, New York Times Book Review

1. SPQR: A History of Ancient Rome

2. SPQR: A History of Ancient Rome

3. SPQR: A History of Ancient Rome

4. SPQR: A History of Ancient Rome

5. S.P.Q.R: A History of Ancient Rome (Paperback or Softback)

6. SPQR: A History of Ancient Rome

7. SPQR: A History of Ancient Rome

8. SPQR: A History of Ancient Rome

9. SPQR: A History of Ancient Rome

10. SPQR: A History of Ancient Rome