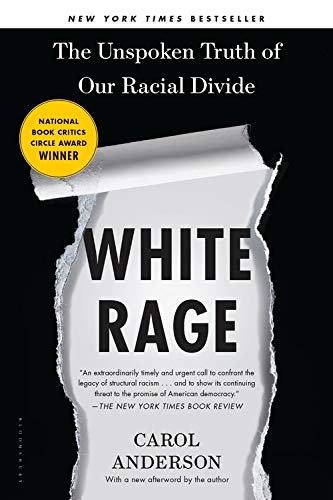 From the Civil War to our combustible present, White Rage reframes our continuing conversation about race, chronicling the powerful forces opposed to black progress in America--now in paperback with a new afterword by the author, acclaimed historian Carol Anderson.

As Ferguson, Missouri, erupted in August 2014, and media commentators across the ideological spectrum referred to the angry response of African Americans as “black rage,” historian Carol Anderson wrote a remarkable op-ed in The Washington Post suggesting that this was, instead, "white rage at work. With so much attention on the flames," she argued, "everyone had ignored the kindling."

Since 1865 and the passage of the Thirteenth Amendment, every time African Americans have made advances towards full participation in our democracy, white reaction has fueled a deliberate and relentless rollback of their gains. The end of the Civil War and Reconstruction was greeted with the Black Codes and Jim Crow; the Supreme Court's landmark 1954 Brown v. Board of Education decision was met with the shutting down of public schools throughout the South while taxpayer dollars financed segregated white private schools; the Civil Rights Act of 1964 and Voting Rights Act of 1965 triggered a coded but powerful response, the so-called Southern Strategy and the War on Drugs that disenfranchised millions of African Americans while propelling presidents Nixon and Reagan into the White House, and then the election of America's first black President, led to the expression of white rage that has been as relentless as it has been brutal.

Carefully linking these and other historical flashpoints when social progress for African Americans was countered by deliberate and cleverly crafted opposition, Anderson pulls back the veil that has long covered actions made in the name of protecting democracy, fiscal responsibility, or protection against fraud, rendering visible the long lineage of white rage. Compelling and dramatic in the unimpeachable history it relates, White Rage will add an important new dimension to the national conversation about race in America.

Carol Anderson is the Charles Howard Candler Professor and Chair of African American Studies at Emory University. She is the author of many books and articles, including Bourgeois Radicals: The NAACP and the Struggle for Colonial Liberation, 1941-1960 andEyes Off the Prize: The United Nations and the African American Struggle for Human Rights: 1944-1955. She lives in Atlanta, Georgia.

"[A] slim but persuasive volume . . . A sobering primer on the myriad ways African American resilience and triumph over enslavement, Jim Crow and intolerance have been relentlessly defied by the very institutions entrusted to uphold our democracy." - Washington Post

"White Rage is a riveting and disturbing history that begins with Reconstruction and lays bare the efforts of whites in the South and North alike to prevent emancipated black people from achieving economic independence, civil and political rights, personal safety, and economic opportunity." - The Nation

"[White Rage] is an extraordinarily timely and urgent call to confront the legacy of structural racism bequeathed by white anger and resentment, and to show its continuing threat to the promise of American democracy." - Editor's Choice, New York Times Book Review

"An unflinching look at America's long history of structural and institutionalized racism, White Rage is a timely and necessary examination of white anger and aggression towards black America . . . A compelling look at American history, White Rage has never seemed more relevant than it does today." - Bustle, “17 Books On Race Every White Person Needs To Read”

"White Rage belongs in a place of honor on the shelf next to other seminal books about the African-American experience such as James Baldwin's The Fire Next Time, Isabel Wilkerson's The Warmth of Other Suns, and Michelle Alexander's The New Jim Crow." - Santa Barbara Independent

"[A] powerful survey of American history as seen in the violent white reactions to black progress, from Reconstruction to the great migration to the current political landscape." - Boston Globe

"Anderson has shown, with her well-sourced (she has several hundred detailed footnotes) and readable book, why the fights over race and access to the perquisites of American citizenship grind on . . . White Rage lends perspective and insight for those of us who are willing to confront, study and learn from the present situation in this country." - St. Louis Dispatch

"It's shocking, beautifully written, and, with white supremacy knocking on the White House door, more important than ever. Some books are great, some books are essential. White Rage is the latter." - Ed Yong, The Millions

"Truly, I couldn't put it down. [White Rage] draws a razor-sharp line from the Civil War to Trayvon Martin with all the stops in between. If you want context for . . . the life we're living in this country right this minute, I urge you to pick up a copy. [Its] 160 pages have the power to change your life." - Ann Patchett, Parnassus Musing

"Powerful . . . Like a meticulous prosecutor assembling her case, Anderson lays out a profoundly upsetting vision of an America driven to waves of reactionary white anger whenever it’s confronted with black achievement." - Bookforum

"Bracing . . . It might all seem very conspiratorial and cloak-and-dagger, were it not also true. Reading through all the frightfully inventive ways in which America makes racial inequality a matter of law (and order) has a dizzying effect: like watching a quick-cut montage of social injustice spanning nearly half a millennium." - The Globe and Mail

"[F]or readers who want to understand the sense of grievance and pain that many African Americans feel today, White Rage offers a clearly written and well-thought-out overview of an aspect of U.S. history with which the country is still struggling to come to terms." - Foreign Affairs

"Prescient . . . provides necessary perspective on the racial conflagrations in the U.S." - Kirkus Reviews

"Anderson’s mosaic of white outrage deserves contemplation by anyone interested in understanding U.S. race relations, past and present." - Library Journal

"[An] engaging, thought-provoking work . . . Anderson’s clear, ardent prose detailing the undermining of America’s stated ideals and democratic norms is required reading for anyone interested in the state of American social discourse." - Booklist

"Few historians write with the grace, clarity, and intellectual verve Carol Anderson summons in this book. We are tethered to history, and with White Rage, Anderson adeptly highlights both that past and the tenacious grip race holds on the present. There is a handful of writers whose work I consider indispensable. Professor Anderson is high up on that list." - William Jelani Cobb, author of THE SUBSTANCE OF HOPE

"White Rage is a harrowing account of our national history during the century and a half since the Civil War--even more troubling for what it exposes about our present, our deep and abiding racial divide. This is necessary reading for anyone interested in understanding--and perfecting--our union." - Natasha Trethewey, Winner of the Pulitzer Prize for NATIVE GUARD and Two-term Poet Laureate of the United States

"To overcome our racial history, Americans must first learn our racial history--as it truly and painfully happened. This powerful book is the place to start." - David Von Drehle, author of RISE TO GREATNESS: ABRAHAM LINCOLN AND AMERICA'S MOST PERILOUS YEAR

White Rage: The Unspoken Truth of Our Racial Divide

White Rage : The Unspoken Truth of Our Racial Divide

White Rage: The Unspoken Truth of Our Racial Divide Paperback

White Rage : The Unspoken Truth of Our Racial Divide