Items related to The Impending Crisis of the South: How to Meet It

Helper, Hinton Rowan The Impending Crisis of the South: How to Meet It

The Impending Crisis of the South: How to Meet It 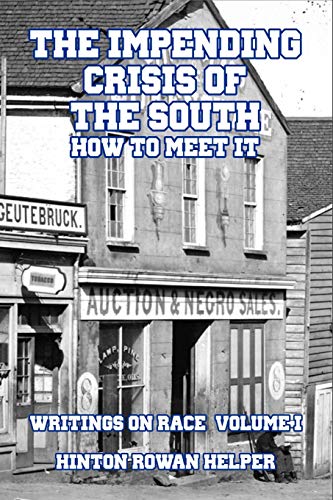 Writings on Race: volume I. By Hinton Rowan Helper. One of the most influential anti-slavery books in pre-Civil War America, this book was written by a Southerner who not only opposed White Supremacy, but also clearly understood the relationship between race, civilization, political power, and demographics.

By assembling official statistics from slave-owning and non-slave owning states, the author proved conclusively that the presence of slaves was not, as the South’s leaders claimed, vital for their economy, but in fact exactly the opposite.

Helper showed that by all measures—economic, social, political, agricultural yield per square mile, education, literacy, infrastructure, and many other indicators—the use of black slaves by the South was an impediment upon economic growth which had severely retarded the entire development of the southern states.

The book conclusively proves that slavery—and the presence of large numbers of Africans in the South—was a significant barrier to the economic advancement of whites. In addition, Helper compiled the most detailed statistics on slavery, showing exactly how many slaves there were, and the precise number of slave-owners—and that the vast majority of white Southerners did not own slaves but were tricked into supporting a jingoistic fake “Southern Nationalism” orchestrated by a small clique of immoral ultra-capitalists.

Helper’s conclusive economic and social arguments against slavery were backed up by his heartfelt moral objections to the idea of “owning” another person—but he was no bleeding heart liberal.

This work, which became a Republican Party election propaganda piece in the US presidential election of 1860, also revealed that the officially-endorsed abolitionist movement had two goals—the emancipation of African slaves—and their immediate deportation back to Africa or somewhere else where they would be permanently geographically isolated from white America.

As expected, this book and its ideas caused a storm in the South, where it was banned and its possession and distribution outlawed. In Arkansas, three men were hanged after being arrested for being in possession of the book. Nonetheless, between 1857 and 1861, nearly 150,000 copies of the book were circulated, despite it being blamed for heightening the tension which led to the Civil War, which was fought over the issue of slavery.

It was without question the most influential and powerful abolitionist book ever written. Its reasoning and judgement remain sound throughout the years, and if anything, Helper’s warnings about the long-term effect of the presence of massive numbers of nonwhites in white America has come true a thousand times over.

“Freesoilers and abolitionists are the only true friends of the South; slaveholders and slave-breeders are downright enemies of their own section. Anti-slavery men are working for the Union and for the good of the whole world; proslavery men are working for the disunion of the States, and for the good of nothing except themselves.

“Patriotism makes us a freesoiler; state pride makes us an emancipationist; a profound sense of duty to the South makes us an abolitionist; a reasonable degree of fellow feeling for the negro, makes us a colonizationist.”

Helper went on to produce two other books dealing with the racial question, Nojoque, A Question for a Continent (1867), and Negroes in Negroland (1868), both of which were highly critical evaluations of Africans. They are reprinted as Volumes II and III respectively in this new series.

Hinton Rowan Helper (1829-1909) was born near Mocksville, North Carolina, the son of a slave-owning farmer. After graduating from Xavier College Preparatory in 1848, he became a fervent opponent of slavery-and of the presence of Africans and non-Europeans in America. His most famous book, The Impending Crisis of the South, marked him out as a visionary on racial matters, and he was appointed by President Abraham Lincoln as the United States consul in Buenos Aires from 1861 to 1866. His residence in Mocksville, North Carolina, was declared a National Historic Landmark in 1973 and is maintained as a monument by the US National Parks Service.

1. The Impending Crisis of the South: How to Meet It

2. The Impending Crisis of the South: How to Meet It

3. The Impending Crisis of the South: How to Meet It

Shipping: US$ 20.57
From United Kingdom to U.S.A.
Destination, rates & speeds