Items related to Charisma and Disenchantment: The Vocation Lectures... 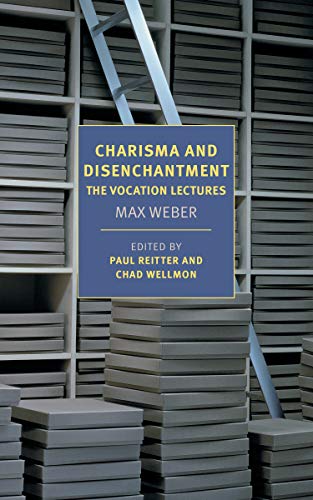 A new translation of two celebrated lectures on politics, academia, and the disenchantment of the world.

In 1919, just months before he died unexpectedly of pneumonia, the sociologist Max Weber published two lectures that he had recently delivered at the invitation of a group of students. The question the students asked Weber to address in these lectures was simple and haunting. In a modern world characterized by the division of labor, constant economic expansion, and unrelenting change, was vocation, in intellectual work or politics, still possible? Responding to the students’ sense of urgency, Weber offered his clearest account of “the disenchantment of the world,” as well as a seminal discussion of the place of values in the university classroom and academic research. Similarly, in his politics lecture he gave students what is undoubtedly his pithiest version of his account of the nature of political authority. Weber’s attempts to rethink vocation remain as relevant and as stirring as ever.

Max Weber (1864–1920) was a sociologist, philosopher, jurist, and political economist. Considered one of the founders of modern sociology, he is best known for his essay “Protestant Ethic and the Spirit of Capitalism” and for his writings on bureaucracy.

Paul Reitter is a professor of Germanic languages and literatures and the director of the Humanities Institute at Ohio State. His work has appeared in Harper’s Magazine, Bookforum, The Paris Review, The Nation, and The Times Literary Supplement as well as in various scholarly journals. He is the author of three books, and recently collaborated with Jonathan Franzen and Daniel Kehlmann on The Kraus Project.

Chad Wellmon is the author of Becoming Human: Romantic Anthropology and the Embodiment of Freedom and Organizing Enlightenment: Information Overload and the Invention of the Modern Research University. He is on faculty at the University of Virginia.

Book Description The New York Review of Books, Inc, United States, 2020. Paperback. Condition: New. Language: English. Brand new Book. A new translation of two celebrated lectures on politics, academia, and the disenchantment of the world. The German sociologist Max Weber is one of the most venturesome, stimulating, and influential theorists of the modern condition. Among his most significant works are the so-called vocation lectures, published shortly after the end of World War I and delivered at the invitation of a group of student activists. The question the students asked Weber to address was simple and haunting: In a modern world characterized by the division of labor, economic expansion, and unrelenting change, was it still possible to consider an academic or political career as a genuine calling? In response Weber offered his famous diagnosis of "the disenchantment of the world," along with a challenging account of the place of morality in the classroom and in research. In his second lecture he introduced the notion of political charisma, assigning it a central role in the modern state, even as he recognized that politics is more than anything "a slow and difficult drilling of holes into hard boards." Damion Searls's new translation brings out the power and nuance of these celebrated lectures. Paul Reitter and Chad Wellmon's introduction describes their historical and biographical background, reception, and influence. Weber's effort to rethink the idea of a public calling at the start of the tumultuous twentieth century is revealed to be as timely and stirring as ever. Seller Inventory # AA99781681373898

3. Charisma and Disenchantment: The Vocation Lectures

Book Description Paperback. Condition: New. Paperback. In 1919, just months before he died unexpectedly of pneumonia, the sociologist Max Weber published two lectures that he had recently delivered at the invitation of a group of students. The.Shipping may be from multiple locations in the US or from the UK, depending on stock availability. 104 pages. 0.204. Seller Inventory # 9781681373898

6. Charisma and Disenchantment: The Vocation Lectures

10. Charisma and Disenchantment: The Vocation Lectures

Shipping: US$ 18.92
From United Kingdom to U.S.A.
Destination, rates & speeds