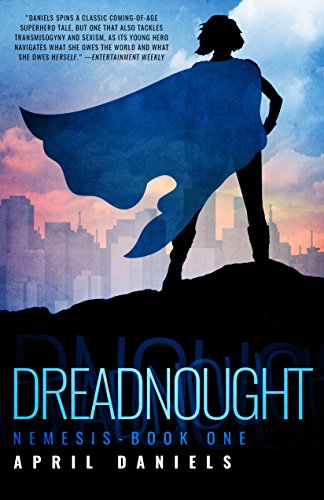 An action-packed series-starter perfect for fans of The Heroine Complex and Not Your Sidekick.

“I didn’t know how much I needed this brave, thrilling book until it rocked my world. Dreadnought is the superhero adventure we all need right now.”―Charlie Jane Anders, author of All the Birds in the Sky

Danny Tozer has a problem: she just inherited the powers of Dreadnought, the world’s greatest superhero. Until Dreadnought fell out of the sky and died right in front of her, Danny was trying to keep people from finding out she’s transgender. But before he expired, Dreadnought passed his mantle to her, and those secondhand superpowers transformed Danny’s body into what she’s always thought it should be. Now there’s no hiding that she’s a girl.

It should be the happiest time of her life, but Danny’s first weeks finally living in a body that fits her are more difficult and complicated than she could have imagined. Between her father’s dangerous obsession with “curing” her girlhood, her best friend suddenly acting like he’s entitled to date her, and her fellow superheroes arguing over her place in their ranks, Danny feels like she’s in over her head.

She doesn’t have time to adjust. Dreadnought’s murderer―a cyborg named Utopia―still haunts the streets of New Port City, threatening destruction. If Danny can’t sort through the confusion of coming out, master her powers, and stop Utopia in time, humanity faces extinction.

April Daniels graduated from UC Santa Cruz with a degree in literature. She completed her first manuscript by scribbling a few sentences at a time between calls while working in the customer support department for a well-known video game console.
She has a number of hobbies, most of which are boring and predictable. As nostalgia for the 1990s comes into its full bloom, she has become ever more convinced that she was born two or three years too late and missed all the good stuff the first time around.

“I didn’t know how much I needed this brave, thrilling book until it rocked my world. Dreadnought is the superhero adventure we all need right now.”―Charlie Jane Anders, author of All the Birds in the Sky

“...A fascinating exploration of gender identity in a fantastical setting.”―Publishers Weekly

“This first title in the series offers a rich, unusual mix of subjects and themes for fantasy fans.”―School Library Journal

“I’m not normally a fan of superhero narratives, and then I find an exception that grabs me by the throat and makes me love it. Dreadnought is one of those exceptions.” ―Liz Bourke, Tor.com

“Dreadnought is a coming-of-age story: it’s all about Danny coming to terms with her own power and her own agency, not just as a superhero, but as a person (and as a person who chooses to be a superhero), and it’s one that doesn’t shy away from consequences, either. People get hurt, sometimes badly―sometimes killed, and it’s this willingness to highlight the fact that standing up doesn’t come without real cost that gives Dreadnought its real heart.”―Locus Magazine