Items related to The Schoolgirl Strangler 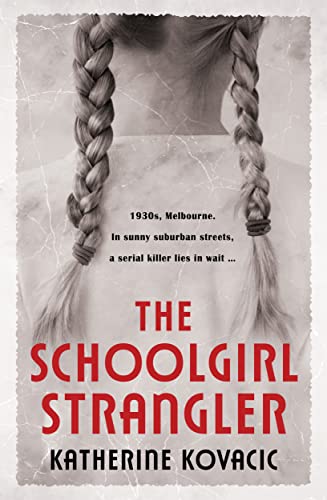 Book Description Paperback. Condition: new. Paperback. The shocking true story of a serial killer in 1930s Melbourne. Shipping may be from multiple locations in the US or from the UK, depending on stock availability. Seller Inventory # 9781760686635

Book Description Softcover. Condition: New. November, 1930. One sunny Saturday afternoon, 12-year-old Mena Griffiths was playing in the park when she was lured away by an unknown man. Hours later, her strangled body was found, mouth gagged and hands crossed over her chest, in an abandoned house. Only months later, another girl was murdered; the similarities between the cases undeniable. Crime in Melbourne had taken a shocking new turn: this was the work of a serial killer, a homicidal maniac.Despite their best efforts, police had no experience dealing with this kind of criminal. What followed was years of bungled investigations, falsely accused men - and the tragic deaths of two more girls - before the murderer was finally caught and brought to justice.With all the pace of a thriller, Katherine Kovacic recounts this extraordinary, chilling true story - of failed police enquiries, a killer with a Jekyll and Hyde personality, and the families shattered when four innocent lives were cruelly taken."The Schoolgirl Strangler is the fourth book by Australian author, Katherine Kovacic. Four girls of school age murdered, over a span of five years from late 1930, in or near Melbourne, and theÂVictoria Police are baffled. There are suspects; inquests conclude â murderâ ; arrests are made; a man is put on trial; reputations are ruined; but the real perpetrator is not found. Untilâ ¦Kovacic gathers together the information about each of the four cases from a myriad of sources and presents it to the reader in easily digestible form. Suspects, the actions of the police, the trial, the appeal, the execution of the death sentence, the accused manâ s dialogue with the Inspector General of Prisons, and the Justiceâ s instructions to the jury are all thoroughly examined.Kovacicâ s meticulous research is apparent on every page, but at no time does this make for a heavy read: the way the facts are fed into the narrative gives it the feel of a crime novel, never dry or dense; always interesting, moreso from the benefit of hindsight and modern psychiatric and psychological knowledge.The half-decade that Kovacic describes is so different from the modern day as to be incredible to younger readers: a dearth of telephones and other technology; the use of Indigenous trackers; longer travel times; suits as routine attire even during leisure activities; newspapers passed around between neighbours; no formal Legal Aid; and of course, no recourse to DNA or trace analysis.Many aspects of the condemned manâ s behaviour are chilling, including: his clear lack of remorse; his smile at hearing of his death sentence; and his statement just before his execution â If I were to go out tomorrow it [murder] would happen againâ ¦ The sooner I go through the drop the better.â The first two cases certainly present particular members of Victoriaâ s police force in the early 1930s in a less-than-favourable light: selecting a suspect, then ignoring any evidence that didnâ t implicate him and failing to follow up any alibis he cited; dubious line-up practices; and trying to force a confession on circumstantial evidence. More than one miscarriage of justice is narrowly averted.While maps of the various locations mentioned in the text would have been an appreciated addition, this is otherwise a thoroughly gripping and fascinating look at a series of murders that shot fear into Victoriaâ s parents."316 pages ; 24 cm #0521 ISBN 10: 176068663 8ISBNÂ13: 9781760686635Sodeman, Arnold Karl, 1899-1936.ÂÂ|ÂÂSchoolgirls -- Crimes against -- Australia -- Melbourne (Vic.)ÂÂ|ÂÂSerial murder investigation -- Australia -- Melbourne (Vic.) -- History -- 20th century.ÂÂ|ÂÂSerial murderers -- Australia -- Melbourne (Vic.)ÂÂ|ÂÂSerial murders -- Australia -- Melbourne (Vic.) -- History -- 20th century.ÂÂ|ÂÂSchoolgirls -- Crimes against -- Melbourne (Vic.)ÂÂ|ÂÂSerial murder investigation -- Melbourne (Vic.) -- History -- 20th century.ÂÂ|ÂÂSerial murderers -- Melbourne (Vic.)ÂÂ|ÂÂSerial murders -- Melbourne (Vic.) -- History -- 20th century.ÂÂ|ÂÂCrime & criminology (Australia)ÂÂ|ÂÂAustralian Elizabeth's Bookshops have been one of Australia's premier independent book dealers since 1973. Elizabeth's family-owned business operates four branches in Perth CBD, Fremantle (WA), and Newtown (NSW). All orders are dispatched within 24 hours from our Fremantle Warehouse. All items can be viewed at Elizabeth's Bookshop Warehouse, 23 Queen Victoria Street\, Fremantle WA. Seller Inventory # 53948

Book Description Paperback. Condition: new. Paperback. The shocking true story of a serial killer in 1930s Melbourne. Shipping may be from our Sydney, NSW warehouse or from our UK or US warehouse, depending on stock availability. Seller Inventory # 9781760686635